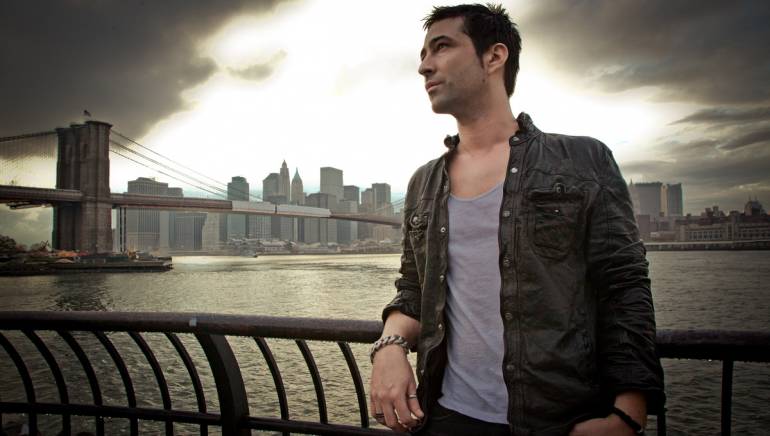 When he crossed from the sweaty confines of France’s club scene into the choppy waters of pop production in 2010, Sandy Vee hit his stride with a rising DJ named David Guetta. Since then, Vee’s output has served as something of a benchmark for his newfound peers: His tireless work ethic landed him on the Grammy podium with Rihanna, and in the studio with countless other first-name stars: Britney, Katy, Akon. Now, it brings the songwriting mega-producer to a phone call with BMI.

1. What makes you different from other pop producers?
Before I jumped into the electronic work I remember hating all that, boom boom boom. I’m classically trained, so before doing anything I was playing through Beethoven. And then I switched, from African to jazz to punk and pop. Then it was more instruments to play—eventually I became a DJ. I started with a computer and a big mixer and jumped in. What makes me a good producer is being a musician but knowing a lot about the electronic world. In the end I’m a mix between a DJ and the electro-producer, which is perfect today.

2. What do you see happening or changing this year for you as a writer/producer?
The way I produce today will be different. I think it’s always changing. The sound will stay electronic: not dance but electronic. Because I like to use guitar mixed with sampled guitar, drums against sampled drums, these kinds of things. I hope this ‘80s vibe and some more rock pop will find its way into electronic music.

3. With all of the work coming in, do you find yourself turning down offers? What do you look for in a project?
I wanna take time. Sometimes with the label everything is rushed. It’s hard to go in a room with a new writer, and they want me to just go, in one day—when some people are taking six months. The label can put some artists they’ve signed with so many producers, and I think this is a big mistake. When you start a new artist, you get someone so talented, but you need to find a sound. A twelve-track album can be split among twelve producers and you get twelve sounds. I think it’s important to build a sound for artists, and that’s what I want to do. When you work with people, you share many things; it’s not just about work, but about life—especially when you work all the time. So this year is a about a lot more collaboration. And I want to sign some people.

4. Speaking of working all the time: How do you keep balanced going at this pace?
I’m starting to do some stuff, like Buddhism: some meditation to disconnect, I try to make one hour a day. I quit smoking; started going to the gym again. Last month I was saying to myself, “You’re crazy.” There was a day when I opened my eyes with a sequencer and a cup of coffee in hand. I woke up and my laptop fell on the floor and I was like, “This is not normal.” Last year I promised my wife I’d do a week of vacation and I wouldn’t take my phone and my laptop, and I did it. It was great. I thought it would be impossible—by the fourth day I was starting to miss my computer.

5. What’s a piece of advice you might give to a young gun starting out in electronic production?
I remember when I was a kid: after school, going to the music shop and hanging with the owner. It was guitars, bass, drums… and now today you go in a shop and it’s gone. Now it’s about digital. My first advice would be: “You’re a beatmaker? Cool. Just pick up a guitar or bass, and learn. You will need something else because we’re talking about music, not just beats. It’s a different approach—especially if you want to do music for your job.” I am a bass player. I used to play onstage. Almost every day, when I’m home, I practice. I try to practice one hour a day. Since I play the six-string [bass], the range is larger; I can play some root chords. On computer it’s not the same.

6. Do you stick to a formula in the studio?
Maybe I’m crazy: I think I’m the only producer without a template. When I start a new song on my sequencer, it’s totally blank. There’s a risk to take. I’m happy to be versatile. I know to get a very good song takes composition and now I’m more involved in the top line. So I get all the ingredients to build a perfect song. I continue to learn. I’m hoping that I can wake up one day and do a ballad; another day more pop; more dance, electro. I like to work that way—never the same.

7. Do you go after a specific sound in your head, or do you like to explore at whim?
More and more I love to play guitar, and also keyboard. I’ve got a good group of analog synths, because I’m a fan of that and I want to bring in crazy synths. I don’t like presets. I like to find ways to work and make my own sound. I’m a geek with that. I’m lucky because I can sometimes get a synth one year before it’s released and play it. I was with [Norwegian producers] Stargate last week; they brought us the new Minibrute prototype. It was great.

8. Can you give me three artists who were or currently are big in terms of influencing your sound?
Daft Punk is the beginning of everything for me. Stardust [who shares member Thomas Bangalter in common with Daft Punk] was the first to loop a half-bar sample and make a rock song with that. Skrillex is exciting. More than 20 minutes of dubstep and I think I’ll kill myself, but I like someone who brings something new or hard. It’s not just doing what someone is already doing; it’s their own. I love what’s happening right now.

9. What are your three favorite albums?
I’m a fan of the ‘80s, the sound: It was rich. Thriller would be on top. Prince —he’s one of my biggest influences. As far as an album…Graffiti Bridge, the first with the New Generation—also: Purple Rain, Diamonds and Pearls, of course. And Daft Punk, their first album: Homework. Do I have to pick just three? Definitely Led Zeppelin, Untitled/IV, “Rock and Roll.”

10. Which is your favorite place to catch a show?
I like Roseland [Ballroom]. I don’t know how many times I’ve gone to a real concert, but I’ve been to Roseland a few times. I want to take more time this year to go out. I like catching rock stuff in Brooklyn, on the Lower East Side. I miss New York so bad; I’ve been in LA for two weeks. I’m doing stuff with amazing people but I couldn’t imagine living here!