Posted in MusicWorld on January 17, 2013 by Lisa Zhito 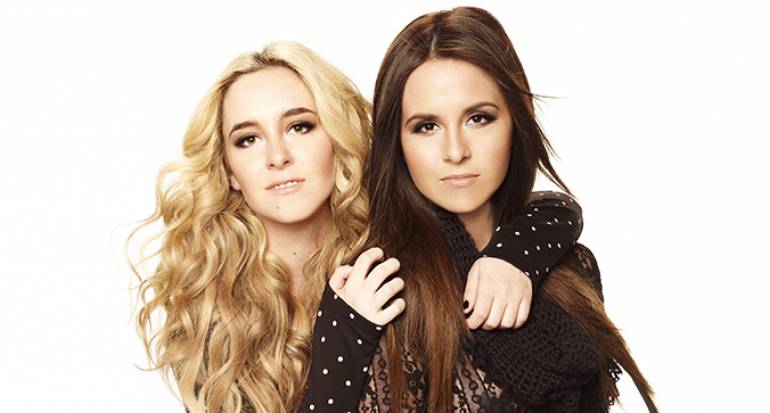 If there’s a fairy tale for the YouTube generation, Megan & Liz are living it. At the age of 10 the fraternal twins were borrowing the family camcorder to record their Britney Spears- and Christina Aguilera-inspired performances. At 15 they discovered the internet; before you could say “overnight sensation,” the girls had thousands of loyal fans tuning in to their YouTube channel for a weekly dose of hooky, infectious pop. Now about to turn 20, Megan and Liz have released four EPs, sold almost 400,000 singles, and have close to 800,000 subscribers on their YouTube channel. They’ve also relocated from Edwardsburg, Michigan to Nashville, Tennessee, where they’re recording their debut album and promoting the single “Bad For Me.”

1. Millions of 14- and 15-year-old girls want to be pop singers. What did you do differently to make this dream actually come true?

Megan: To this day I still don’t know! I think a lot of it has to do with the fact that there are two of us. We’re twins, so that in itself does stand out. But I really think it was just drive, hard work. Liz: I think we had a dedication that a lot of other 14- or 15- year olds didn’t have. We dedicated ourselves to doing a video a week or a video every two weeks, when we were, like, 15. Who does that? I still can’t believe we did that. I think that paid off.

2. You started out taking cover requests from fans, but you’ve always written your own songs, too. Why was that important to you?

Megan: The first song we wrote we were, like, 10. We just thought, let’s try it for fun. And when I got to be 13 and picked up the guitar, it turned into, oh, this will be a way to stand out. And as we matured we figured out we could put our feelings and emotions into songs, so it became a venting thing, a therapeutic thing.

3. Most of what you write about is love and relationships. Is there a topic you’d like to write about but haven’t?

Liz: I feel like we could write more about life in general. Those songs are hard to come by without coming off preachy and cheesy. So that’s something as artists we’re trying to figure out, how to write songs about life that aren’t romantically oriented. But the more you do it the better it will get.

4. Do you have your audience in mind when you write?

Megan: I feel like our audience is very in tune with us, so if we’re writing about something that we went through, odds are the majority of our fans went through it, too. They go hand in hand.

5. What about videos, do you think about the video when you write?

Liz: Whenever we’re writing I always definitely picture a story. I don’t know if it’s necessarily a video but I always envision how this would happen in real life and what it would look like.

6. You’re doing a lot more professional writing sessions now that you’re in Nashville. Is that intimidating?

Megan: It’s definitely intimidating! For example, we wrote the new song “Bad For Me” with Martin Johnson, who’s the lead singer of Boys Like Girls, and Rob Hawkins. You walk into a session like that – we’re really big fans of Boys Like Girls, and we’re writing with the frontman! I was nervous to meet him, and it’s a professional setting. Liz: The tension almost fuels your creativity because you have to bring your A game. These people are the real deal, you can’t sit back and throw out some B lines and hope it works. I think the intimidation is good, I like “writing up” – writing with writers who are more established than we are. It’s a challenge.

Megan: We’ve been with them about two or three years. We’d always heard a lot about BMI and it just fit. It just felt really right.

8. What songwriters have influenced you the most? Liz: Max Martin is a definitely a big one, his melodies are just incredible. He has a really good way of blending in to every artist that he works with. He’s a chameleon. We look up to him so much. Savan Kotecha is another one, he wrote “What Makes You Beautiful.” He’s a really good pop writer. And then Taylor Swift, obviously, because she’s a lyrical genius!

9. Is there a live music venue you’ve always dreamed of playing?

10. Since you’re pop artists, why did you choose to move to Nashville over Los Angeles or New York?

Megan: Nashville is very homegrown, and there are a lot of really great songwriters here. There are a lot of great writers in L.A., too, but I feel like in Nashville it’s more organic, which is how we started as artists. Also, we grew up in a really small town, and moving to Nashville just felt like home. So we thought, if we have to go to L.A. for writing sessions or something, we’ll go. But we want to call Nashville home.