Posted in MusicWorld on December 11, 2012 by Lisa Zhito 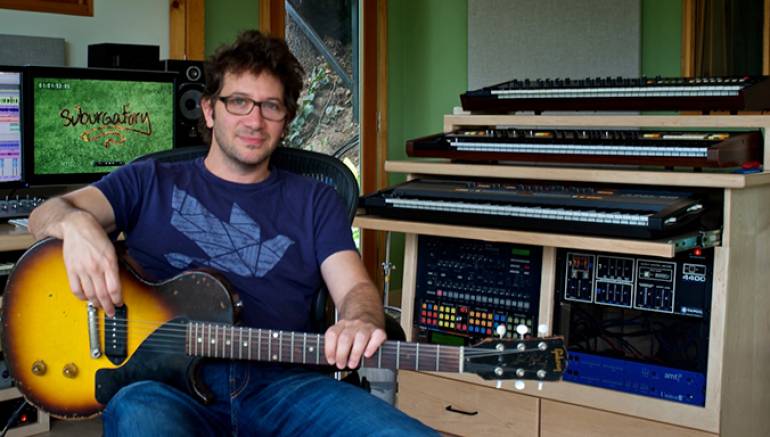 Los Angeles-based composer Jared Faber takes a unique approach to film and television scoring: a songwriter’s. “I’ve always been a fan of great songs and songwriting. I feel like I come at my composing from that direction,” Faber explains.

Indeed, strong melody lines and tight phrasing are hallmarks of Faber’s work on such TV shows as “Suburgatory,” “Emily’s Reasons Why Not” and the animated series “Clifford’s Puppy Days,” the latter which earned him an Emmy nomination. In fact, in addition to the score, Faber penned the theme song for all three series, working with his longtime collaborator Emily Kapnek. Composing may be Faber’s bread and butter, but songwriting and producing remain equally important elements of his varied career.

1. You’re a multi-instrumentalist, but is there one instrument you reach for more than others when composing a score?

I’m primarily a guitar player, but I also play pretty good piano and keyboards, and play bass and good enough drums for certain things. But I try to use the guitar as much as possible, and do fun things with guitars. I think that a lot of the scoring I’ve done comes from a real contemporary place, so a lot of times I try to start with guitar, whether it’s acoustic guitar or more textural sounds that I make with pedals and guitars and such,. I’ll do more orchestral type sequencing the same as anybody else does nowadays, piano stuff and all that. But I like coming from guitar. Through guitar more than any other instrument I feel like I can actually convey emotion.

Emily and I went to high school together at the High School for the Performing Arts in New York. We’ve been friends since back in the day, and we’ve always sort of just played around, written songs together and so forth. She’d be working on one-act plays she’d was trying to get produced in these little black box theaters in New York and I would write a song for it or a little underscore. We’d do these mock commercials, she’d come up with these crazy ideas and we were doing it all for fun. We just had a great session the other day, we were in the studio and had a couple of cast members from “Suburgatory” who are both former “Saturday Night Live” cast members over. When they left I said to Emily, “I just can’t believe all of the stuff we used to mess around with, all the stuff that we just did for fun: someone is paying us to do it now!”

3. “Suburgatory” is in its second season now. Is it hard to keep the ideas fresh when you’re working on a series?

It absolutely is! You come up against a moment and it’s like, “God, I feel like I’ve scored this moment 20 times in the past already, how do I do it differently this time?” That certainly is a challenge. You just kind of buckle down and try to find something new. I try to treat it like a song: what kind of song would I want to hear in the background right now? The advantage is, you have stuff to lean on. You’re not reinventing the wheel every time. You go, “What is it that we do when this happens? Oh yeah, I know what we do!” And I just do it a little differently than I did it last time.

4. You did the “Tranquilidad Cubana” project with Kool Kojak, were the musical director and band leader for Spike TV’s Guy’s Choice Awards, have written songs for and produced other artists … How does your non-composing career complement the film and TV work?

Well, what’s nice about being a composer for film and TV is you’re part of a team, you’re making a project with a whole lot of elements. But to be sure, you are not the captain of that ship. There’s an architect and you’re the electrician. And, you know, the electrician is certainly an important part! But when you make records that is the product. When you’re writing a song, the song is the thing. When you’re writing music for a show, the show is the thing. So for me it’s nice to be able to go back and forth between the two. I enjoy them both.

5. Do you have a fantasy project?

I do have a sort of fantasy project that I’m kicking around. I had an opportunity to do the “Tranquilidad Cubana” project in Cuba a few years back. And I would really love to do a project in Brazil, maybe something that incorporated a visual element that had to do with Brazilian music, Cuban music and the music of New Orleans. I’ve also really been digging the show “Treme” and I love the music on that show. Whoever is involved in all of that music has a great fantasy job! It would certainly be wonderful to be involved in a show where music is that important, where music is a character in the show and you could really dive into it in that way.

6. Which composers influenced you?

Some of my favorite music is the music of Gil Evans, the Miles Davis-Gil Evans collaborations. Gil Evans was an amazing orchestrator and composer. I loved that stuff. It wasn’t film stuff, it wasn’t to picture, but I always loved the emotion and texture in that music. The music that’s influenced me for the most part hasn’t been film music. It’s been more the music I enjoyed listening to as a kid and still enjoy today. I guess I’m thinking Stevie Wonder, Lennon/McCartney, Carole King, Paul Simon. I think that’s the backbone. I listened to a lot of R&B and soul growing up, the classics like Al Green, Bill Withers, Earth Wind & Fire.

When I was in high school, BMI came to my school and did a whole presentation and explained what publishing was and all of that stuff, and of course I wasn’t ready to sign with a PRO (performing rights organization) at that time, but that was when I first learned about it. And then in the end, I believe Michael Jackson was with BMI, and that’s good enough for me!

8. Do you have a favorite live music venue?

Absolutely! The places that I enjoy listening to music tend to be small venues. I love a place in New York called Nublu in the East Village. There used to be a club called Augie’s Jazz Bar where I used to listen to a lot of jazz when I was in college, also in New York, and that was a great small environment to hear amazing musicians. That club still sort of exists but it’s changed. Now it’s called Smoke. And in L.A., I like a place called Hotel Cafe, it’s another fairly intimate venue to hear up and coming singer-songwriters and that sort of music. I love intimate venues. I love to really hear the music.

9. If you weren’t a composer what would you be doing?

I’d be sleeping more, I think! That’s tough. I don’t know! I never really considered the fallback. I never did. I feel like not considering the fallback sort of forced me to do it.

10. So, what advice do you give people just starting out?

I guess I’d say, pursue the stuff that you love. Pursue the music that moves you, because I feel like that’s ultimately what you’re going to be the best at. I find that a lot of people feel it’s very important to do things that they think are more commercially viable, things that they think more people want to hear. And obviously as a composer being versatile certainly is a huge asset, but I think that will come. I feel like it’s good, especially when you’re just starting out, to concentrate on what really moves you emotionally and musically. Focus on what your reason for getting into music is in the first place.