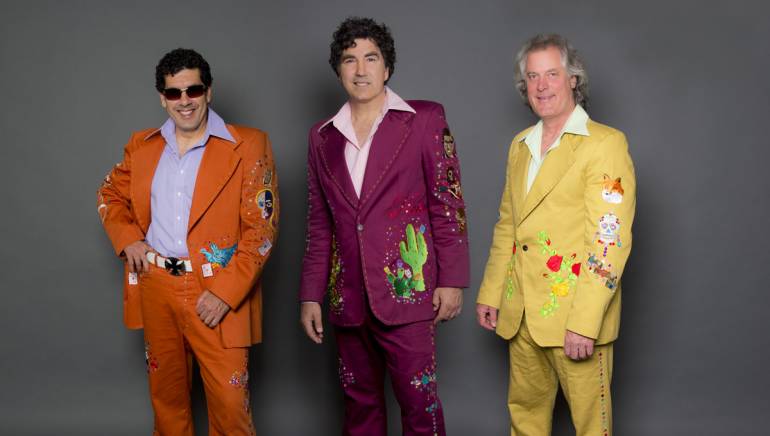 In 2007, the Krayolas—Hector Saldana’s long-defunct troop of Texas twangers—caught an unlikely second wind. That year, the band reissued a heap of their out-of-print recordings, which quickly garnered unexpected buzz on Sirius XM Satellite Radio’s “Kick Out the Jams!” with Dave Marsh and “Little Steven’s Underground Garage” and NPR’s “All Things Considered”; in Texas Monthly; at SXSW; and via rock critics Ben Fong-Torres, Chet Flippo, Joe Nick Patoski and Margaret Moser, as well as renowned author Sandra Cisneros. The Krayolas’ resurgence evolved from feel-good story into full-scale phenomenon, as the band reached No. 1 on Amazon’s Top Latin Digital Albums chart, No. 2 on its Top International Digital Albums chart and fluctuated between No. 14 and No. 20 on Amazon’s all-genre Top 100 Digital Albums chart. Over the past five years, the re-banded Krayolas have spouted over four-albums’ worth of folk-flecked rock, bustling corridos and Lone Star blues. That mixture—currently featured as a free Tex-Mex sampler on Amazon.com—houses tales that dance between fact and fiction for Saldana, who doubles as a music columnist with the San Antonio Express-News.

1. You’re the singer in the Krayolas, but also the predominant songwriter, right?
I’ve collaborated with my brother on a couple but mainly I write all the songs. During the Krayolas’ first incarnation, around ’79-81, my brother David and I co-wrote some songs with Rene y Rene, which was a big group down here. We sang other parts on those records, co-wrote with Rene Ornelas. We had seen at that point how collaboration could make something better: if you kind of just open up, the final product can be really good.

2. Before the comeback the Krayolas went 22 years without being a band. How had your influences and tastes changed by the time the band reformed?
We were kind of hardheaded. I think maybe some of the songs we might have done we thought, “Those don’t sound like Krayolas songs,” where now I’m a little more open. Doug Sahm was always a big influence—he’s like a god here—people like Flaco Jimenez, Bob Dylan.

And I’m lucky as a journalist, talking to young performers and songwriters, and going to see them—I cover lots of shows—you pick up little things. It’s a combination of being inspired, humbled and almost challenging yourself, almost getting out of the way of yourself. If you just go the way the song is telling you to go, it works better.

3. Is that usually with one element in particular? The form? The lyrics?
Sometimes you’ll have the melody that’ll almost suggest where the lyrics go. It kind of does start with the lyrics or a hook. Our music can sound quite different, but when I’m writing them they all kind of sound the same, because I tend to almost talk-sing them. I talk ‘em out. Then the phrasing is the next thing, how it rolls of the tongue to where it’s not a poem; it’s a song. Then the music can maybe massage it a bit. I find I write the best songs when I’m relaxed and not trying to write a song.

4. Is it safe to say then that you wouldn’t endorse the idea of writing every day?
I kind of go when the mood strikes. Sometimes I can do it to a particular goal though. A friend of mine, Michael Guerra, he’s been touring with Raul Malo of the Mavericks—he told me he was putting a record together and they were playing Gruene Hall, so I went to go see them. He kind of sings more of a harmony. I thought, “Oh man, I think I have a good idea,” and I wrote a song for him. So that was kind of a bit of work, but I was inspired to write him a song. You can knock something out, but it’s a little more fun to be in a groove.

5. Some of your lyrics have drawn attention for underlining cultural politics or their corresponding, controversial events. Do you chalk up your evolution as a writer to being older and wiser?
Some of them are little more overtly political. In the song “Home,” the character could’ve been a migrant worker or someone who’s in this country illegally.

Those themes—here they’re in the air a lot, they’re in the newspaper a lot. “Catherine” is a story right out of an obit. I don’t know, maybe it’s a process of having a little more courage to write about some of those things and then again, sometimes, not self-editing: not thinking, ‘Well no, I can’t write that.’ If you’re feeling inspired, then go with it. It might just be being in the newspaper business; I want to get the information out.

I came up with the idea of these tacky, Nudie-style suits, like a reject from the Sonny and Cher Show. They’re decorated with images from our songs, and we debuted the look at SXSW. A song that I wrote, titled “Alex”—on the back of mine is the last-known image of my nephew, Alex, a marine sergeant who died from a wound sustained in Iraq, in 2006. At least that way we’re kind of making a statement.

6. Pushing back further than your work as a journalist, which albums had the biggest impact for you growing up?
The first album I ever had was the Kinks’ first album, so that was a big influence, from the name of our group to everything else. I’d have to have some Beach Boys in there, could include Dylan’s Blonde on Blonde. I’d also have to have Who’s Next? [by the Who]. Those records I listened to over and over…Nick Lowe’s Pure Pop For Now People.

7. What place is your favorite for catching live music?
Gruene Hall, it’s a historic dance hall. I love venues where you can get close and it still sounds good. That’s a cool place to catch an act. I also like John T Floore Country Store, in a little city called Helotes, which is an outdoor country venue. I like that place because Willie Nelson, no matter how big he’s got, he always returned to this little roadhouse. I cover a lot of groups at the Majestic Theatre in San Antonio. That’s a historic movie house from the turn of the century.

8. Why BMI?
I just felt a kinship with BMI. I’ve participated in panels to encourage young musicians to join, as a music writer and as a musician. BMI has tapped into income streams with regard to satellite radio airplay. With the Internet it’s incredible how it breaks down. BMI Live has been great for me as a songwriter.

9. Were you affiliated back in the ‘70s?
I wasn’t a member back then. I should have been; the Krayolas were successful in the late ‘70s and early ‘80s. We played a lot but we weren’t taking care of that end of business. We kind of lost out. But now in the digital age there are so many places that are playing music. It makes it very easy to be a member of a performance rights group. I have actually met Grammy winners that aren’t affiliated. And I’ve told them, “Hey, don’t beat yourself up because you haven’t—start!” You can’t change the past but you can change today or tomorrow.

10. What would offer as advice to songwriters, or do differently than what you did back then?
I would tell a singer/songwriter or group to get organized and do things to make it move forward. Forget the busy-work. Even if it’s just baby steps, moving forward is better than going sideways. With the Internet and the way, say, BMI is set up, it’s easy to join. The Krayolas are a prime example: you talk about a group probably most people have never heard of, yet we’re making money, making royalties thanks to BMI, because we have taken the steps to get organized with our music and get the music the respect it deserves.

If you’re interested in getting your music copyrighted and registered, you should take those steps—just like you should present your music the best you can. Especially with BMI Live, you don’t have to be a superstar. If you’re playing gigs you can actually see the fruits of your labor. I would have never guessed I’d be writing songs, much less getting them played. But if we’d never prepared we could never have benefited from them.