Posted in MusicWorld on February 21, 2012 by Joy Ramirez 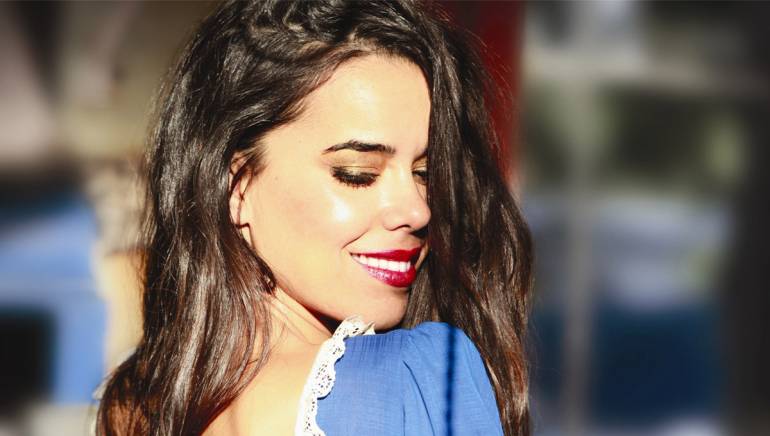 Beatriz Luengo grew up on stage, singing and dancing in a variety of venues including the circus. In her native Spain, the singer/songwriter is known for her early career in film and television as well as for her music. Luengo now resides in Miami, where she is enjoying critical acclaim for her fourth album, Bela y sus Moskitas Muertas, a cheerful, pop-inflected, reggae-tinged collection of songs that reflect her current state of mind.

1. “Moskitas muertas” is a Spanish saying that means shy and withdrawn – a wallflower. Who are Bela and her “moskitas muertas,” and why is she your alter ego?
For this – my fourth album – I wanted to be a part of an alter ego. In my previous albums I was always a rather melancholy and sad songwriter. I always used to write about pain and bad things. Four years ago I had a situation in my life that was very intense and I felt it necessary to give the world a more positive and happier message. So I did some covers that were more upbeat, and I was writing in a fantastical way and looking for double meanings, playing with words and sayings in Spanish, using sarcasm. It was a stage for me personally and also for my songwriting. So I decided to liberate myself from all that I used to be and the way I used to write songs and to write using Bela as my alter ego. Bela is like the little voice that tells me to be a little more “spicy” [laughs], a little more adventurous, writing about things I had not written about before, and in doing so to get rid of the “moskitas” that were eating at me.

2. Your latest album features several musical collaborations—including one with Ziggy Marley—and your music in general combines many styles, from flamenco to R&B to pop. Would you say that you are inspired by variety?
This album was inspired by Jamaica, where I started making it, and by the styles of ska, reggae, folk, Caribbean. So yes, really I am inspired by variety. I grew up in the circus and I was always surrounded by music and used to the fusion of styles. For example, in the circus where I traveled, we had a lot of Romanian gypsies –which are very different from Spanish gypsies and flamenco—but I grew up listening to the music of both. I also listened to Bob Marley when I was young. And, for example, in my mind there is nothing more important than the music of Lola Flores. I did not grow up only in Spain. I traveled all over Europe, acquiring different musical styles in a very natural and unforced way. So I feel very free with regard to songwriting and making music.

3. In your acoustic, Spanish version of Kings of Leon’s “Use Somebody,” you manage to make a sad song sound fun and sweet. Why did you decide to cover it?
This song came about in a very natural way. I adore Kings of Leon, and I never would have imagined doing a cover of one of their songs. But one day I was on the beach with a guitar and I started playing a chord and then singing this melody and I said, “What is that? It’s already a song. It’s the melody of ‘Use Somebody.’” I got home and I could not get that song out of my mind. I wrote a different song because it was never my intention to just translate theirs. Mine is about an unrequited love, a love that is made up as a lie that the girl tells herself. Someone suggested I record it in a studio to be more professional, but in the studio it would have lost what was so natural about it. It’s not an ambitious song or an ambitious version. It’s not a single for promotion or a marketing tool, but a gift to myself—something that came out naturally. It’s the first cover to be approved by the band.

6. What inspires you to write music?
I write everyday, but I never grab the guitar and say, ‘Ok, I’m going to write a song.’ It’s more that I live my life and in everyday things I get inspired. For example, I go to the hairdresser and I read a magazine and the girls in the salon are talking about the Kardashians and Jennifer Lopez and it inspired me to write the song “Chicas de Revistas” (from the new album). What I don’t like is to try and get inspired to write enclosed by four walls. I like to find inspiration in my normal life, on my bike, at the supermarket, at the hairdresser or talking to a friend. And then at night I do the work of trying to arrive at a concept, to find the structure, a chord, a verse based on the things I’ve noticed.

7. What advice would you give to songwriters just starting out?
The way music is today in 2012, I’d say to look for their sound not just with the guitar between their hands, but to not be afraid to experiment with beats or with other kinds of more electronic or modern sounds. I’d advise them to try sounds that are current and experiment with their voice instead of just being safe.

8. What is your favorite live music venue?
To listen to music, I love the Fillmore in Miami. For performing, I really don’t have a special place where I like to perform. For me, the important thing is the people who are in front of me.

9. Why did you choose BMI?
Because of their support for new artists. From the first day I arrived in the U.S., before I had signed with Sony, Marissa from BMI’s L.A. office had listened to my demos and was already trying to connect me with producers in Atlanta and trying to help me because she always liked my music. That meant a lot to me. It’s easy when you’re big and everyone wants to help you, but when you’re just starting out, it’s nice to have that kind of support.

10. What is your most memorable moment as an artist thus far?
In Paris in 2008, I was singing in front of the Champs-Elysees as part of The Festival of Music with 50,000 people in the street. I was the only Latin artist, and when I went up on stage and the journalist who presented me said “And now Beatriz…” and the 50,000 people said “Luengo!” This was the most important moment of my life so far.