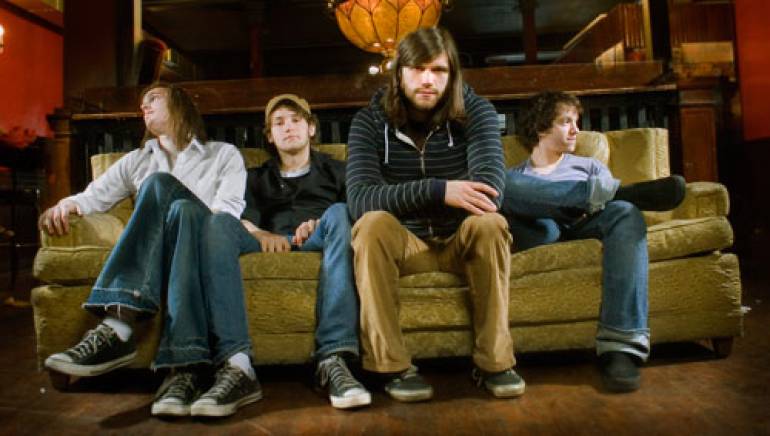 To the lucky few who caught the first live shows of new Chicago-based quartet Wax on Radio, those performances may be remembered as the launch of a strikingly original new voice in rock music. At club dates in the Windy City and in New York, the customary buzz of cocktail chatter and the click of Blackberrys fell to a hush as jaded concert-goers stopped and craned their necks to see just who was making the riveting, emotionally-captivating music that was pouring forth from the stage. Wax on Radio brings a fresh, well-developed sound to rock music at a time when the genre seems to have reached a creative plateau. Familiar, successful formulas like emo, nu metal, hardcore are being played out all over the charts but there is an undeniable restlessness among fans and a sense that rock is overdue for a blast of fresh air. Enter Wax on Radio, which mixes catchy songwriting, intelligently evocative lyrics and an engaging style. The lyrics plunge in to big themes that resonate with listeners – missed opportunity, preserving your individuality, lifting your life out of stagnation and living it with passion. The music is sonically spacious and beautifully composed, in the vein of Pink Floyd or Yes, but Wax On Radio is also being compared to Coheed & Cambria, Mars Volta, Bright Eyes, Radiohead, Muse, Jane’s Addiction and latter day King Crimson. Wax on Radio performs the trick of sounding both progressive and nostalgic.

Wax on Radio was born in 2004 when singer Mikey Russell, bassist Harrison Taylor, guitarist Bob Buckstaff and drummer Sammy Del Real hooked up in the tiny suburban Chicago music scene and immediately hit it off. The four band members were all living in and around the towns of Schaumburg and Lake Forest when Mikey put out word he was looking to start a new band. The foursome, who had never before met, came together through the recommendations of mutual friends. But on their first meeting they quickly realized they had much in common. Chicago has an illustrious music history, being home to the likes of the Smashing Pumpkins, Wilco, Kanye West and others, and that tradition can cast a huge shadow over new acts. But the members of Wax on Radio found their common ground further back in time and farther afield. Mikey and Bob collect old vinyl records and share an affection for rock radio’s golden age, the 1960’s and 70’s. Mikey thinks nothing of spending an afternoon tracking down now rare copies of Led Zeppelin or Prince, and in fact, does not own a cd player, only a turntable. Sammy is a versatile stickman who developed his chops touring the world playing Latin percussion with his dad, who is a pianist. He developed an appreciation of a diversity of styles, and it gives his drumming an added spice. Harrison, a former DePaul University student, is a student of classic rock and the great rock bassists like Jaco Pastorius and it shows in his nimble, flowing style. The quartet first jammed in the garage of Mikey’s mother’s house and Harrison and Mikey immediately began sharing songwriting duties.

According to Mikey, who is probably the most literate high school dropout in rock, his inspiration comes from everything from movies to great books, including the film ‘American Beauty’ and novels by Russian writer Dostoevsky and the existential philosopher Camus –particularly Camus’ ‘The Stranger’ and ‘Notes from the Underground.’ “I’m drawn to stories of people who get up and recapture their own lives,” Mikey explains. The band chose its name, as Mikey says, “as a way of paying homage to the great era of vinyl. It’s our statement on the music we like and the way we like to write songs.”

Wax on Radio’s debut album, Exposition, is an ambitious and successful blend of the band’s talents. Mikey’s keening voice is arrestingly heartfelt, and gives songs like ‘Today I Became a Realist’ and ‘The General of Medicine City’ a persuasive power. Bob Buckstaff’s guitar and Harrison Taylor’s bass propel the music forward at a fast pace, making nimble jumps into unpredictable tempo changes and stops and starts that keep the listener rapt.

Mikey’s lyrics have an existential edge to them, and touch on all sorts of moods, from dark to ecstatic, all delivered in searing poetry: “The sad face of dreamers waking to the life that passed them by,” he sings in ‘Today I Became A Realist.’ “They march in place straight to their graves.” He continues: “Sail on quick, fly past the world, find me a love.” The songs ‘Remembering,’ ‘Dawn Architects’ and ‘The Devil’ are three of the band’s best, blending sharply incisive lyrics with great hooks and masterful guitar work. Listeners to Exposition will be surprised that so much sound comes out of such young artists – Sammy is 18, Harrison 19, Bob is 22 and Mikey is the elder statesman at 23. There is a brightly lit road ahead for this young band. It is music that transcends easy labels.