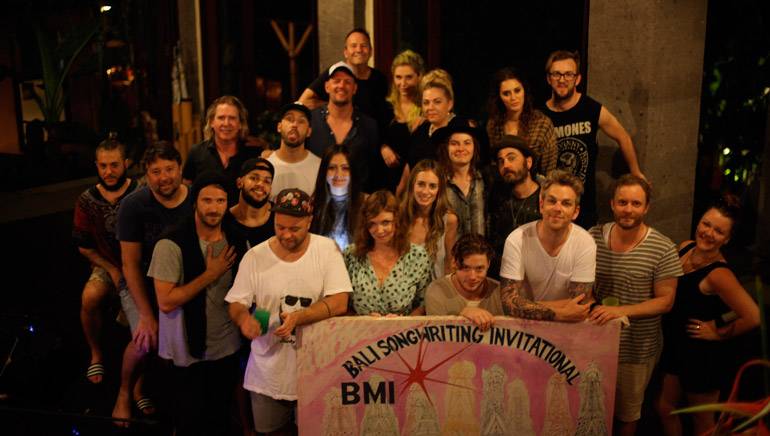 It can feel like a first date: sometimes the chemistry works, sometimes it doesn’t. When walking into a co-writing session, artist, producer, and songwriter meet, enter a confined space, and if there’s a creative spark, come out with a song.

BMI, in partnership with the Invitational Group, founded by music industry veterans Peter Coquillard and Michael Taylor, recently helped cultivate a warmer environment for those writing sessions. Quite literally, the Invitational Group imported songwriters, artists and producers from all around the world, including the U.S, UK, Australia and Sweden, to work together for one week and create one song per day in the warm jungles of Bali, Indonesia.

Perhaps it is the cultural kindness of the Balinese people, maybe it is the sunshine and pool in the Villa Swara Padi Recording Studio, but stepping into these sessions throughout the week seemed less like the uncomfortable first date and more like family reunions. With much of the group meeting just a few days prior, the secluded destination—this time Bali, other camps held on a yacht ported in Montenegro—created a solidarity that continued to build with each day of writing. The songwriting delegates were cohesive, open, and most importantly, uninhibited in their creative choices.

Multiplatinum BMI writer, Nash Overstreet, of Hot Chelle Rea, described his experience: “I got some of the coolest songs I’ve done in a long time; I’m really excited about them. We had a blast.” New artist, Jordan Fisher, a triple threat if ever there was one, agreed about enjoying the experience of people and location, “I haven’t used my passport much in my life but hopefully that will change. [In] Bali, I got to leave the States for such a great reason, [and] collaborate with incredible people.”

What seemed like unusual partnering when arranged, later conceived innovative work. Overstreet added, “There was a surprisingly good chemistry. I like how they made the match ups, [and] paired people together. Even if it didn’t make sense [at first], once you’re done with the song it made sense.”

For many of the young artists new to the songwriting process, they were matched with songwriters and producers who have a track record of proven hits. And, with much of this year’s roster of attendees currently charting, that was not hard to do. GRAMMY-nominated and multi-platinum producer/writer Mitch Allen, a longtime BMI affiliate, learned that he reached number 1 on UK charts with his work on “Want to Want Me” performed by Jason Derulo, while in Bali. An established songwriter, Allan was no stranger to writing camps, but he did make this distinction, “The Bali songwriting invitational is always my favorite part of the year. Not only do you get a chance to write with some of the most talented songwriters, producers, and artists in the business, but even more importantly, you also get to be creative in one of the most beautiful and inspirational places in the world.” He was also joined by lyricist and his co-writer on Kelly Clarkson’s “Heartbeat Song,” Audra Mae, who should be getting comfortable at the top with Miranda Lambert’s recording of her hit single “Little Red Wagon.”

Already a star through her YouTube and social media presence, young Jasmine Thompson wowed veteran artists by her mature understanding of her sound and lyrics. When speaking to Coquillard, Jasmine simply put it as, “This has been the best week of my life. I loved working with everyone and it’s been an amazing experience!”

But the wows were not limited to the industry newcomers; it was a similar feeling for legendary producer Steve Lillywhite, whose work spans decades of recording sessions, including U2, The Rolling Stones, Dave Matthews Band, to name a few. Lillywhite expressed, “Bali is a magical place at the best of times, but add the extra ingredients of amazing artists, writers and producers and you have a magic that is hard to imagine.”

Blake Sennett’s indie rock background, through his bands Rilo Kiley and Night Terrors of 1927, came to camp with a slightly different perspective than the mostly pop-heavy tribe. Genres were put aside in exchange for creative inspiration. Sennett described, “My experience in Bali really gave me a feeling of belonging, looking around and realizing there are all these other nuts that have these melodies and lyrics stuck in their heads! And you can grab one of them and say ‘Hey, I got this thing, whaddaya think?’ And, off you run, writing a song!”

Now in its sixth annual year, the Invitational Group has found that the fostering of connections made during the week extend beyond the shores of Bali. Most of the writers walked into the retreat hoping to get a few songs out of the process. What they left with was a family of songwriters they can continue to collaborate with as their careers grow. Overstreet plans to do just that, “The people I didn’t get to work with, I got their contacts and we’ll get together in other cities.” Fisher finished by saying, “In such a short time being here, we’ve already become a family and I’m really excited to see how everyone’s careers continue to take off from this point. I’m glad I got to be a part of this experience.” BMI is too.