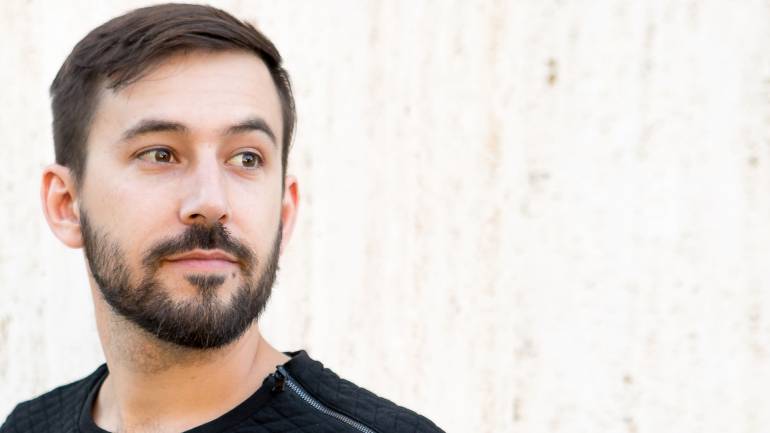 It’s a muggy January morning in LA as I drive to our local Valley diner, where for the past five years, songwriter/producer David Pramik and I have met to talk about music, the industry, and his career. And despite the low cloud cover and heaviness in the air, the day feels remarkably electric…maybe because his GRAMMY nomination has just been announced!

As an alumnus of the prestigious Berklee College of Music, Pramik is a Los Angeles-based music creator who is steadily making a name for himself. While a versatile vocal and a track producer, working across multiple genres, the spotlight is currently shining on Pramik for his songwriting skills. His credits already include recently co-writing the hit “Home” by Machine Gun Kelly, X Ambassadors and Bebe Rexha, and “Broken People” by Logic and Rag ‘N’ Bone Man for the Netflix film, Bright. But it was his work with the band Nothing More on a track called “Go To War” that got the industry to really sit up and take notice. This particular collaboration has earned him a GRAMMY nod for Best Rock Song.

As I arrive, David is already sitting at our usual back table, enjoying his hot chocolate and ready to start the day. Having not seen each other since before the holidays, and now on the precipice of a new year, we immediately start reflecting on what an incredible year he has had and what it feels like for him to now be a GRAMMY-nominated writer.

Jessa Gelt: You’re up for a GRAMMY (Best Rock Song) for co-writing “Go to War” by Nothing More. How does it feel and what was that day like for you?
David Pramik: I definitely wasn’t expecting a nomination when it came in.  There are some exciting things happening in my career at the moment, but this one caught me completely by surprise.  As you might imagine, it felt pretty amazing – the morning I got the news was especially incredible. I woke up to see texts from my manager, Brett Bassock and my publisher, Rhea Pasricha [at Prescription Songs], telling me the news. I didn’t see it coming at all, so I was on cloud nine the entire day.

JG: How did you get involved with the band?
DP: I was introduced to them through Rhea, who set up the session. It was a fun day with the guys.  We all got together at my old studio in Glendale and put the song together in just a handful of hours. The best songs always come from days when the vibe is good, and we all got along right off the bat, which let us focus on the music and have fun with it. It’s always great to work with the full band too, so everyone can have a hand in creating the song.

JG: This early in your career, you’ve already worked in multiple genres – from dance-pop to EDM to full-on rock to country to hip-hop – do you have a particular comfort zone, or do you prefer constantly mixing it up?
DP: I really prefer mixing it up! I grew up on rock so that comes easiest to me. It feels natural to start writing riffs, and the drum parts and the form all feel intuitive to me. That said, I really enjoy crossing my sound over to multiple genres. I think being able to bounce between styles helps me as a producer, because sounds come and go like any other fad; and I honestly believe that a great song can work in almost any genre, and it’s the production that usually defines its genre.

JG: Are there any aspects of your music that you hold as “defining characteristics” of your sound?
DP: You know that’s honestly hard to say, being so close to the music I make. I’m told that I definitely have a sound, my drums especially. I like big epic sounds that have some gravitas. Maybe it’s my background in instrumental work, but there’s something cinematic and dramatic that I tap into in my songs. I like to think that I can achieve a clean “grit” that gives a cool character to my tracks.

JG: As a producer and a songwriter, collaboration is obviously a major part of your creative process – do you find it easier or preferable to work with other artists? Do you find it more fulfilling helping others realize their own musical vision?
DP: I love collaboration -  it’s the most important thing about the whole process. Working with other creatives gives us all a chance to elevate each other and let our best qualities shine. Even on production - which I’ll do alone a lot of the time - working with others is awesome because I get to see how they do things, how they treat their hi-hats, how they fill the space up, etc. Every time I work with somebody else I pick up something new.

I’ve spent a lot of time developing my own style, which helps me work with artists as they develop their vision for a song or album, and can use my sounds as a backbone. It’s really fun to be a part of that process and I find it very fulfilling. It scratches a different itch than working on my own music, which can sometimes be even harder since the pressure lies only on me.

JG: Simplicity…
DP: The hardest thing as a producer/songwriter is learning how to be simple. Remember that at the end of the day, it’s about the song. No matter how cool the synth sound is, or how impressive the drums are, if you can’t strip everything back and have a song that is worth hearing, then nobody is going to care about the rest. The song comes first, and as a producer it’s important to keep that goal at the forefront of you and your co-writers’ minds. “Keep it simple” – it’s pretty straightforward. Complexity is overrated.

JG: Any other mottos or theories that you apply to your works, or creative process?
DP: “A rising tide raises all ships” – it’s my motto for the team mentality. The community of writers and producers I work with has always been incredibly supportive and collaborative. When one of us gets a win, we all win. There’s no petty jealousy, so we all work hard for the greater good. Don’t get me wrong, we’re still competitive, but in a sportsmanlike way.  It’s a really important part of the process for me, since this industry can feel a little cutthroat. I’d love to change that dynamic and make a space where everyone wins.

JG: What would your advice be for aspiring music creators looking to follow your lead?
DP: Stop comparing yourself to those around you and start comparing yourself to what’s on the radio. Your competition is out there, so if you don’t sound as good as that, then keep working till you do. I know it might seem like a tall mountain to climb, but to succeed you need to push yourself beyond what you think you’re capable of. For me at least, I never want to hit a plateau or be done learning, so my bar is always rising as I get better.

When you play music for people, watch their reactions. Are they bobbing their heads? Do their eyes react to that one line/melody? I’ve noticed that every song that’s done anything for my career gave others a physical reaction.  If you get a response to your music, you’ve hit something really special – and that’s the goal.

JG: How would you describe the role that BMI has played in your career thus far?
DP: Well truthfully, without BMI - and more specifically – you, Jessa, I honestly don’t think I would have a career at all. You were my very first contact when I first started trying to get into this whole thing, and you set up my first co-write ever when I didn’t really have the chops yet. You saw something in me and gave me a chance. Besides your help, the networking events and writing camps that BMI put together were hugely helpful in introducing me to a lot of the people I work with today.

JG: So…What’s next?
DP: Well, hopefully, win the GRAMMY, haha! I’m just going to keep working, keep writing and getting better. Ideally – by the end of my career – I’d like to have a #1 in all the main formats, so that’s a long- term thing for me. But I don’t think about that on a day to day basis. I just try to write great songs with great people and let the rest of the process unfold as it will.

To hear David’s GRAMMY-nominated Song with Nothing More: “Go To War”
To hear David’s songs on the Netflix Soundtrack Bright: “Broken People” & “Home”