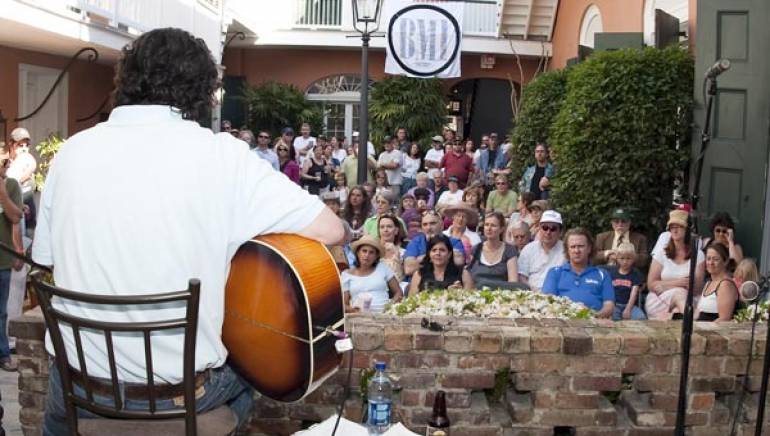 A crowd gathers at the BMI Songwriter Stage at the 2010 French Quarter Festival. Photo: Erika Goldring

The annual French Quarter Festival seized the heart of New Orleans April 9 through 11, and BMI jumped in with both feet, orchestrating its own inaugural stage patterned after other successful BMI stages at Austin City Limits Music Festival, Lollapalooza, and more. The 2010 festival attracted more than 500,000 revelers, who were drawn to the event’s unique celebration of New Orleans culture.

About the French Quarter Festival
This award-winning festival, which began in 1984, has grown to become the largest free music festival in the South. Eighteen stages throughout the French Quarter presented the best in New Orleans music, representing every genre from traditional and contemporary jazz to R & B and New Orleans funk, brass bands, folk, gospel, classical, opera, Cajun Zydeco, Latin World, International, as well as a musical stage for children. Over 105 food and beverage booths located in Jackson Square, Woldenberg Riverfront Park and the Louisiana State Museum’s Old U.S. Mint made up the “World’s Largest Jazz Brunch,” a signature event, featuring authentic local cuisine from renowned area restaurants, many of whom have been with the Festival its entire 27 years. Record sales were recorded by both food and beverage vendors.
fqfi.org