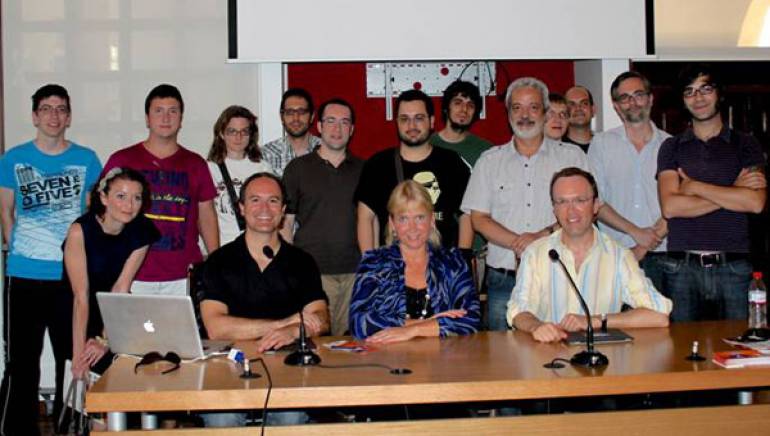 Kristopher Carter, Lolita Ritmanis and Michael McCuistion (Dynamic Music Partners) presented the workshop "Composing for Television Animation" with PlayFest coordinator Conrado Xalabarder for composer attendees of PlayFest Academy 2012 in Úbeda, Spain. Attendees came from far and wide across Europe to be present for the festival.

Michael, Lolita and I hit the ground running Tuesday morning presenting the opening seminar of the festival.  Young film composing students from across Europe joined us and Playfest Academy Coordinator Conrado Xalabarder in a spirited discussion of film scoring techniques along with representative video clips of our work. We shared a scene as it was originally spotted with the producers without any music. The students had a chance to brainstorm ideas on how music could help tell the story through melody, texture, tempo and color; then we explored how contrasting music placed with the visuals evoked vastly different impressions of what the scene was about.  Prior to the final Q&A, we spent some time reviewing works by the participants.

Mid-afternoons in Úbeda find the city deserted as the people take long siestas inside to escape the summer heat. The evening continued our tradition of exploring the narrow streets and dramatically-lit historic buildings before a memorable tasting-menu meal at a fine Úbeda restaurant. The food and wine here in Spain is incredible! Even at midnight as our meal wrapped up we saw the streets alive with locals walking and conversing together, and children playing in the city plazas.

Wednesday we joined some of the other composer invitees in a historical tour of the city.  Úbeda has a rich past, having been a seat of government of both Muslim and European rulers. We saw buildings that had been originally built as Mosques, then replaced with Christian churches, then constantly remodeled as the families in power jostled for position to make the spaces representative of their own dynasties.  Looking forward to spending more time in the next days preparing for the main event: the rehearsals and concert with the orchestra and choir, as well as more chances to celebrate our mutual passion for music in animation and video games with fellow invitees, fans and the community.