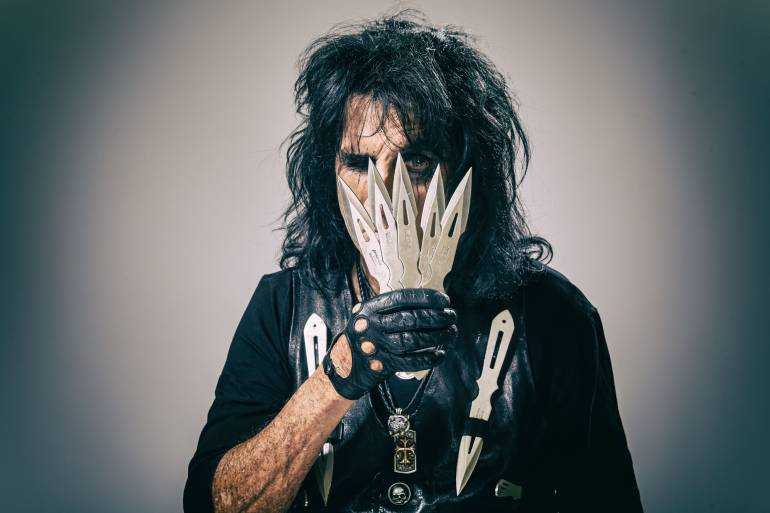 Arguably the singular embodiment of rock’n’roll’s darker side, Alice Cooper – as both band, initially, and later as an individual – deftly meshed elements of psychedelia, vaudeville, horror theatrics, camp and pure turbo-charged rock fury, creating an indelible mark on contemporary popular music throughout his five-decade career. While Cooper pre-dates glam and glitter rock, heavy metal, punk, new wave and gothic rock, his influence looms large within each to this day. Popular artists spawned in Cooper’s wake – from the New York Dolls, Kiss, the Sex Pistols and the Cramps to the Plasmatics, Misfits, White Zombie and Marilyn Manson – are zealous and legion. For pushing the envelope in virtually every capacity, providing the suitably nightmarish score to every rebellious teen’s troubled interior monologue and routinely exploring how far “too far” could ever go, Alice Cooper is justifiably hailed as a legend.

But there’s another aspect to Alice Cooper that, until recently, has been largely overshadowed by the macabre mythology. While his status as a pioneer of shock, sensationalism and spectacle in the annals of rock’n’roll is undisputable, Cooper is also a gifted songwriter of the highest order. Beneath the war paint and leather, Alice Cooper is responsible for some remarkable, enduring music that has defined eras and inspired generations. And while he’s renowned for such classic, barn-burning anthems as “School’s Out,” “Welcome to My Nightmare,” “No More Mr. Nice Guy” and “I’m Eighteen,” Cooper has also periodically showcased a more nuanced, softer side, notably with the vulnerable “How You Gonna See Me?,” the unapologetically romantic “You and Me” and the poignant “Only Women Bleed.”

In November, the Songwriters Hall of Fame acknowledged Alice Cooper as a nominee for induction, alongside fellow performing songwriters as Tom Waits, Jimmy Cliff, Chrissie Hynde and more. And on the precipice of his 70th year, Cooper continues to make music. His 27th studio album, Paranormal, was released this past July, featuring cameos from members of Deep Purple, ZZ Top and U2, as well as original Alice Cooper band members Neal Smith, Dennis Dunaway and Michael Bruce. Cooper continues to tour the globe, bringing his signature brand of rock’n’roll to the masses.

In honor of his Songwriters Hall of Fame nomination accolade, BMI posed a few questions to the man behind the make-up about his storied career, creative process, views on music from the Beatles to the Sex Pistols, and much more.

You were recently nominated for induction into the Songwriters Hall of Fame. How does it feel to be recognized for this aspect of your art?

Anytime I can be in any Hall of Fame with the likes of Burt Bacharach, Paul McCartney, Brian Wilson and any of the greats, I’d occupy the basement and be very happy.

Tell us about your latest album, Paranormal. What’s the story behind it?

Everybody is Paranormal. The definition is next to normal. When I started thinking about everyone I knew and I realized that none of them were normal, they were all paranormal in some way. The album is a series of 13 songs about 13 Paranormal people. See if you fit in.

Your career has both predated and transcended whole genres, and you’ve always stayed relevant – do you have a favorite era?

My early career was fairly blurry even though I wrote some of my best songs blurry. I had a metal period, I had a romantic period, I had an anti-disco period. I don’t know, I think certain songs surface from every era and maybe one out of 20 would end up being a classic for that period. But I am more of an ‘album as an entire piece’ type of guy. But in general I think a song has more staying power in terms of memory. There’s a big difference between an entire Beatles album, which is a great album, and just the song “Yesterday” which is such great SONG. Same thing with my music, there’s are great albums, and then there are great songs, like “I Never Cry,” both equally great but the album is maybe less impactful than a single song in terms of coloring an era. There were good songs that showed up in every era that gave it a general tone, but I can’t really pick a favorite era now that I think of it. Maybe my next era.

BMI Icon John Lydon has gone on record several times citing you as a primary influence. Legend has it that he even sang along with “I’m Eighteen” during his audition to become the singer for the Sex Pistols. What was your opinion of punk rock when that was all gestating?

I think that people missed out on the comedy of Punk Rock. I think the whole idea was that any punk could play in a band. It didn’t have to compare to the Beatles. It didn’t have to be compared to classic songwriting. Any teenage kid was allowed to use his voice on any musical level and it was valid. Just pure angst, emotion and in a lot of ways pure comedy and satire usually. Especially with the Sex Pistols.

Your very first album, PRETTIES FOR YOU from 1969, was a wildly ambitious, psychedelic effort for its time, and largely misunderstood. What do you think of it all these decades later?

It may have been our most creative and subversive album. Dennis and I were surrealist artists, so the album turned out that way. A lot of the songs didn’t make sense to a point that Frank Zappa didn’t even get what we were doing. So that’s what made that album a really creative album, in fact that may go down as the most uniquely and honestly creative album we ever did. It’s still unexplainable.

Can you share any advice you were you given when you were starting out that opened the right doors?

The most impactful idea that came to us was to do something that nobody else has done. There were a lot of Peter Pans but no Captain Hooks; I say that a lot but that’s the best visual for it. We were lucky enough to be the next generation after the Beatles when it comes to songwriting, and the closer you get to the Beatles in terms of songwriting, the better the songwriting tends to be. I think that now that we are so far away from the simplistic great songwriting we’ve sort of traded gourmet food for fast food. We don’t hear a lot of classic songs being released at this point. But in the 50’s to the 80’s, classics were being written all the time.

Talk a bit about your creative process when it comes to songwriting.

I almost always tee off on the title. I let the title write the song. I’ll come up with a title like “Only Women Bleed” and then I can get into why. Why do only women bleed. Why is school out. You can take any of those songs. You write it from the title. I give a lot of credit for Chuck Berry and later Ray Davies for teaching me how to write a complete story in three minutes. I think the trick in my case is to write the punchline first and work backwards.

You’ve appeared on The Muppets Show, sang with Twisted Sister on “Be Cruel to Your School,” and your latest album features a cameo from Larry Mullen Jr. of U2, among others. Are there any performers, artists or songwriters you’ve always wanted to collaborate with? And how do you approach diverse projects? What stays consistent for you and what is flexible?

Who doesn’t want to work with Paul McCartney? Or Bernie Taupin? Or Desmond Child? There are so many artists out there that you wouldn’t believe that I’d be into working with. I’m like a chameleon lyrically, I can write romantic jazz lyrics, I can write punk lyrics or horror lyrics. I’m a bit of a spot writer. If you need a song about a giraffe and an elephant falling in love on the empire state building, I can do that. I just need to know if it needs to be funny, romantic, satirical. Just tell me what you need and I’ll find a way to get there.

Did you ever hear from any of the Beatles about your cover of “Because” for the Sgt. Pepper’s Lonely Hearts Club Band movie?

The only reason I did that movie was to work with George Martin. We did a very straight version of “Because,” since I could do a really good imitation of John Lennon. After I tracked it George said, ‘Ok, that’s great, but how would Alice do it?’ So then I recorded this threatening dangerous sounding version. I literally turned the most beautiful Beatles song into a threat. Which was great! George Harrison apparently loved the darker version.

What’s next for Alice Cooper?

I’ll be finishing this tour and starting on the Hollywood Vampires new album. We’ve all been writing, so we will get together after the holidays and throw all that stuff into a kettle and stir it up and see what comes out. The new Hollywood Vampires album won’t have any covers on it, I don’t think; we’re hoping to do all original music. Since we’ve only written a few songs together, we don’t really know where it’s going to go musically. I’m looking forward to working with three different people on writing because you just never know what’s going to come out.

What role has BMI played in your career?

As a songwriter and recording artist, I don’t really concern myself with business dealings, I let the business people do that – management, accountants, agents, lawyers, publishers. I know that BMI monitors airplay and collects a lot of money and I get paid. If I do my thing right and BMI does its thing right, we’re good.