Posted in MusicWorld on May 1, 2008 by Kevin Zimmerman 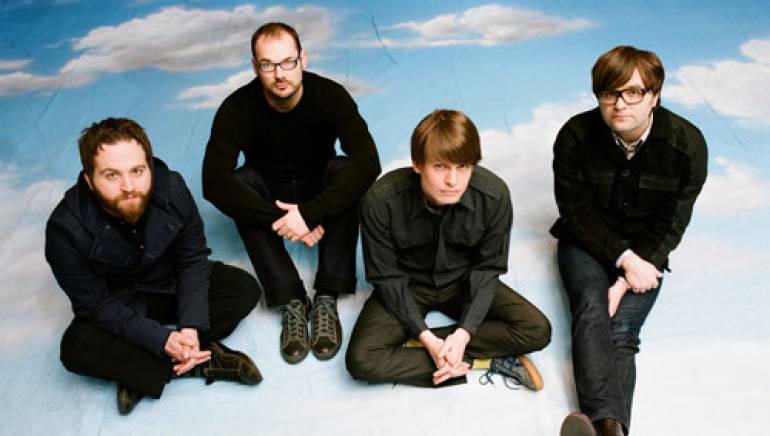 “It’s creepy and heavy. We’ve got a ten-minute long Can jam, and had you suggested that possibility to me in 1998, I’d have eaten your puppy’s brain with a spoon.”

No, that’s not some shock-rocker pumping up his latest sonic gorefest, but Chris Walla, singer/songwriter, guitarist, and producer for the normally melodic pop group Death Cab for Cutie. That he’s invoking Hannibal Lecter-ish images and referencing an iconic experimental German rock outfit is just part of what seems a concerted effort by the Cuties to redefine themselves on their eighth full-length studio album, Narrow Stairs (Atlantic).

That the “Can jam” in question, “I Will Possess Your Heart,” is the disc’s first single should excite — or confound — longtime fans used to the gentle introspection of most of its work to date, including 2003’s breakthrough Transatlanticism (Barsuk) and its major-label debut, 2005’s Plans (Atlantic).

Stairs, Walla says, is “really weird … it’s totally a curve ball, and I think it’s gonna be a really polarizing record. But I’m really excited about it. It’s really got some teeth. The landscape of the thing is way, way more lunar than the urban meadow sort of thing that has been happening for the last couple of records.”

One senses that taking time away from Death Cab for his solo album Field Manual (Barsuk) earlier this year has re-energized Walla, as well as bandmates Nick Harmer (bass), Jason McGerr (drums) and co-songwriter Ben Gibbard (lead vocals, guitar). The spectral “The Ice Is Getting Thinner” and the spaced-out “Pity and Fear,” not to mention several other “abrasive” (in Walla’s words) tunes, reveal a band that seems to be going for broke.

Harmer calls the collection “a sampling of the most uptempo, upbeat Death Cab songs, as well as some of our saddest. I hope this album is a bit of a surprise for those out there that think they have us all figured out,” says Harmer. “We can’t wait to share these songs with the world.” The group will be doing just that this summer, playing a number of festivals — including Bonnaroo and Coachella — in addition to headlining its own dates and, generally, calling its own shots.

“On [Plans] we were really making a lot of decisions based on what we felt other people were gonna think,” Walla declares. “But this record, there’s this kind of slightly malicious glee that we all have that it sounds kind of crazy. It’s pretty fun.”