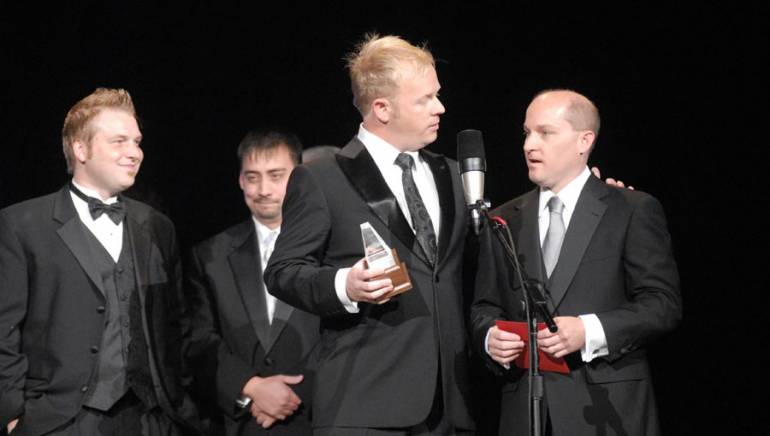 Dailey & Vincent accept the 2009 IBMA Entertainer of the Year Award during the International Bluegrass Music Awards, held October 1 at the Ryman in Nashville. Photo: Dan Loftin

BMI’s bluegrass family dominated the 2009 International Bluegrass Music Awards, walking away with almost every trophy in every category. Dailey & Vincent, Dan Tyminski, and Michael Cleveland garnered the most honors, as they all made return trips to the stage during the ceremony on Thursday, October 1 at the legendary Ryman Auditorium.

Dailey & Vincent claimed the Entertainer of the Year crown for the second consecutive year, as well as Vocal Group and Gospel Recorded Performance of the Year for “On the Other Side,” written by BMI songwriters Jimmy Fortune, Kevin Denney and Tom Botkin.

Longtime favorite Dan Tyminski earned Male Vocalist of the Year, while his acclaimed Wheels, which Tyminski also produced, captured Album of the Year. Michael Cleveland & Flamekeeper dominated their fields as well, winning Instrumental Group of the Year honors and Instrumental Recorded Performance of the Year for their version of the Bill Monroe-penned “Jerusalem Ridge,” produced by Jeff White and Cleveland, who earned his seventh Fiddle Player of the Year title in nine years. Flamekeeper bassist Marshall Wilborn and mandolin player Jesse Brock also took home awards in their respective instrumental categories.

Dale Ann Bradley walked away with her third consecutive Female Vocalist of the Year win, while head-turners the SteelDrivers earned the Emerging Artist of the Year trophy. Song of the Year went to “Don’t Throw Mama’s Flowers Away,” performed by Danny Paisley & The Southern Grass, while the Daughters of Bluegrass’ recording, “Proud To Be a Daughter of Bluegrass,” earned Recorded Event of the Year honors. Kristin Scott Benson garnered the Banjo Player of the Year title, while Josh Williams earned Guitar Player of the Year. Blue Highway co-founder and ace Dobro player Rob Ickes walked away with his 11th trophy in his instrumental field, further underscoring his potency in the highly competitive category.

Influential troupe The Lonesome Pine Fiddlers were inducted into the International Bluegrass Music Hall of Fame. Founded in 1938 by Ray Cline, the band enjoyed considerable success in the 50s and early 60s. Bluegrass genre-builder Hylo Brown was also recognized with the IBMA’s prestigious Distinguished Achievement Award.

For a complete list of 2009 IBMA winners, please visit www.ibma.org.

ENTERTAINER OF THE YEAR
Dailey & Vincent

EMERGING ARTIST OF THE YEAR
The SteelDrivers