Posted in MusicWorld on March 15, 2010 by Jaan Uhelszki 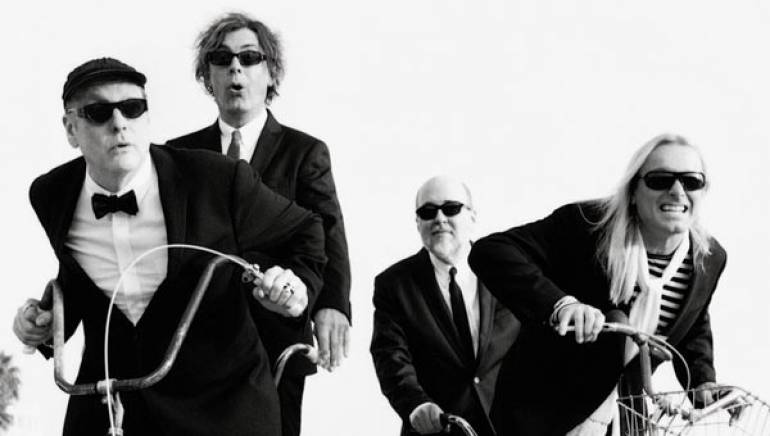 BMI will partner with SXSW to present Cheap Trick on Friday, March 19 at Auditorium Shores on Ladybird Lake in downtown Austin, Texas. Free and open to the public, the show starts at 6 p.m., and will feature special guests the BoDeans and Cracker.

Few rock bands have as loyal a following as Cheap Trick, with their mix of high and low culture. For the past 35 years they’ve been fusing together boneheaded schoolboy antics with canny observations about life, love and human nature, and in the process, they’ve sold over 20 million records. Claiming to have gotten their name from a session at the Ouija board, they rocketed out of the Chicago suburbs in 1975, sandwiched between the hedonism of disco and the punk zeitgeist, managing to avoid both the preciousness of the former and the seriousness and nihilism of the latter. They’ve earned a place in the rock canon for their deceptively simple, Beatle-inspired melodies and overwrought live shows. In the process, they managed to reinvigorate American power pop—something that had lain dormant since the demise of both Big Star and the Raspberries in the mid-70s—and helped give birth to the power ballad.

Equally important to their enduring success is the fact that Cheap Trick created a new face of rock—from Robin Zander’s flawless blond hair and Tom Petersson’s dark, dangerous good looks, to Rick Nielsen’s rubbery face and ever-present bow tie and cap to Bun E. Carlos gangster-on-a loon stare. They spiked their collective persona with wit and sarcasm, but also infused it with a refreshing lack of pretense and sincerity that belies the art form. In short: They’ve made rock stardom look like fun, inspiring artists from the Replacements to Smashing Pumpkins, all the way through Guns N’ Roses, Motley Crue and Pearl Jam. Even celebrity chef Anthony Bourdain is a fan. Guitarist Rick Nielsen bumped into the host of TV’s No Reservations on the streets of Manhattan and he gushed, “Hey, you guys were the soundtrack to my life!’” Nielsen recently recalle.

The critics got it, too, praising the keen musicianship of Nielsen’s slash and burn guitar that anticipated speed metal, Zander’s preening, sneering vocals, and perhaps the most underrated rhythm section of its time in Petersson and Carlos. VH1 ranked them number 25 in their list of 100 Greatest Artists of Hard Rock, and in 2009 the Illinois State Senate declared April 1 to be Cheap Trick Day in their home state.

Oddly, Japanese fans recognized Cheap Trick’s genius first. Their first three albums hardly made a dent on the American charts, while their 1977 self-titled debut went gold in that country, turning them into superstars when they hit Japan’s shores in 1978.

Tickets to their show at the Budokan Arena sold out in just two hours, and the recorded performance of the show, simply titled At Budokan, pushed the band into new universe of rock stardom. The live versions of their songs roared to life—bristling with menace and nuance in a way they never had in the studio. The album stayed on the charts for over a year, peaking at number four and eventually selling over three million copies. Even more importantly, Cheap Trick kicked open the doors for much of the hard rock of the next decade—hair bands notwithstanding, and even more of the alternative rock of the ’90s. If you don’t believe it, just ask Billy Corgan, who penned the liner notes for 1998’s Music for Hangovers.

After over 5000 performances, they’re still sporting their original lineup, save for the seven years when Tom Petersson decided to both drop the second “s” in his name and leave the band to form an outfit with his wife Dagmar. Dubbed Tom Peterson and Another Language, the band released only one album. That was the last anyone heard from the bassist until he accidentally spilled beer in Nielsen’s lap at a birthday bash for a member of Duran Duran, which not-so-strangely led to his reunion with the band in 1987. In 1988 the group began work on what would become Lap of Luxury, which went platinum, propelled mainly by an oddball version of Elvis Presley’s “Don’t Be Cruel,” and the success of “The Flame,” which became their only #1 single—and oddly, one they didn’t write.

The heart of Cheap Trick’s success has always been their songwriting—almost always penned by Rick Nielson.

“I’m not sure what the reason is,” Nielson once commented. “They [the band] like to go out more than I do.” His seeming agoraphobia produced the winsome longing of “I Want You to Want Me” and the cautionary nonsense of “Surrender,” that really isn’t nonsense at all, among many others. But Cheap Trick are at their very best conjuring the dark paranoia of “Dream Police,” which shows Nielsen as a thinking man’s rock star—if not a working class hero—not unlike his role model, John Lennon.

The Beatle associations don’t end there. Both Nielsen and Bun E. Carlos were summoned into the studio by Lennon and Yoko Ono to appear on three tracks for Double Fantasy and were recording with Lennon in New York City the evening before he was murdered. The lesser wound is that their contributions never made it to the album. However, they made up for that recently themselves when the group released Sgt. Pepper Live, their interpretation of the Beatle’s classic Sgt. Pepper’s Lonely Heart Clubs Band in 2009.

They also released their 21st album last year, cheekily titled The Latest, and they are still touring relentlessly—including a headline show at 2010 South By Southwest March 19, as part of the SXSW Auditorium Shores Concert Series, with the Bodeans and Cracker opening.

They have appeared on more than 29 soundtracks and have earned 40 gold and platinum records over the arc of their career. Why? “Because I love to play and I think everybody in the band likes to play. And people like us!” laughs Nielson. “Oh yeah, and good songs help.”

That must have been what Stephen Colbert recognized when he asked the iconic band to provide the theme song for the Colbert Report. And he’s not the only one. Since the second season, Cheap Trick has provided the theme music for That ’70s Show. Uber rock-fan designer John Varvatos used the members in an ad campaign for his 2008 spring/summer line, dressing the band in his minimalist togs, putting them on bikes and unleashing them on an empty boardwalk. Understated, yet striking, it struck the right note between classic and modern, capturing the lasting appeal of this band.

This year, Audi recruited Cheap Trick for its Super Bowl ad blitz highlighting their new diesel A3 engine. The luxury car company asked the band to re-record “Dream Police” as “Green Police,” which ultimately reveals just one more angle of the band’s secure place in a more enlightened future.