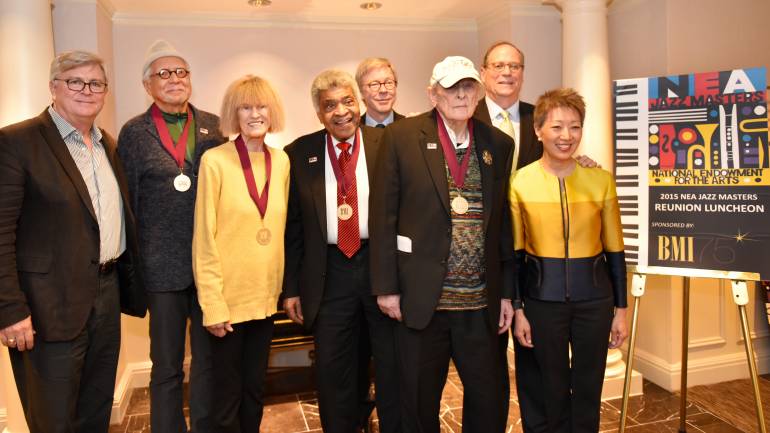 As one of the premier composers of the last 50+ years, Carla Bley has written music for big bands, choirs, chamber orchestras, and small combos. Her additional skills as an arranger, bandleader and keyboardist have been in high demand even outside of jazz, including performing and recording with Jack Bruce, Robert Wyatt, and Pink Floyd’s drummer Nick Mason. Among the awards bestowed upon Bley are a Guggenheim Fellowship for music composition in 1972, the German Jazz Trophy “A Life for Jazz” in 2009, and honorary doctorates from l’Université de Toulouse-Le Mirail in 2012 and the New England Conservatory in 2014. She continues to perform and record frequently, both with her own big band and a number of smaller ensembles, notably the Lost Chords (including bassist Steve Swallow, saxophonist Andy Sheppard, and drummer Billy Drummond.

Composer George Coleman’s deeply soulful saxophone tone has lent support to numerous jazz greats, including the groundbreaking quintet of Miles Davis, Herbie Hancock, Ron Carter and Tony Williams. In addition to the group’s four classic albums, Coleman also played on Hancock’s landmark Blue Note recording, Maiden Voyage. A winner of numerous honors and awards, Coleman has twice been presented the Key to the City of Memphis. In 1997, he received the Jazz Foundation of America’s Life Achievement Award, and in 2012, he was inducted into the Memphis Music Hall of Fame. Also an in-demand jazz educator, Coleman has held teaching positions at Mannes College The New School for Music, Long Island University and New York University, in addition to conducting master classes at universities nationwide.

Saxophonist, flutist, composer and arranger Charles Lloyd’s fierce improvisational skills and interest in fusing jazz with non-Western musical styles established him as one of the key figures in the furthering of jazz as an art form. Whether playing standards, avant-garde, or world music, Lloyd’s emotional, elegant playing is famous for inspiring his accompanying musicians. His own quartet, featuring pianist Keith Jarrett, drummer Jack DeJohnette, and bassist Cecil McBee, recorded the epic Forest Flower: Live at Monterey in 1966 and became one of the first jazz recordings to sell a million copies, popularizing the group in the rock world as well. Awards bestowed on Lloyd include a “Brass Note” on Beale Street in Memphis in 2012, an Award of Merit from the city of Tallinn, Estonia, and the Miles Davis Award from the Festival International de Jazz de Montreal, Canada, both in 2013, and the Alfa Jazz Fest International Music Award in 2014.

In addition to these composers, jazz presenter and club owner Joe Segal was also honored. Segal is Chicago’s longest-tenured jazz presenter, in addition to being a founder of a preeminent jazz organization, the Jazz Institute of Chicago, which promotes the city’s place in jazz history and aims to create new audiences for the genre.

To cap off the event, the BMI Foundation gave out the inaugural BMI Future Jazz Master scholarship to saxophonist/composer/arranger Aaron Hedenstrom during BMI’s annual Jazz Masters luncheon. Congratulations to Carla Bley, George Coleman, Charles Lloyd and Joe Segal for receiving the highest honor that our nation bestows on jazz artists and preservers, and to Aaron Hedenstrom, who we hope will follow in their footsteps.

The NEA Jazz Masters Fellowship is the highest honor that our nation bestows on jazz artists.