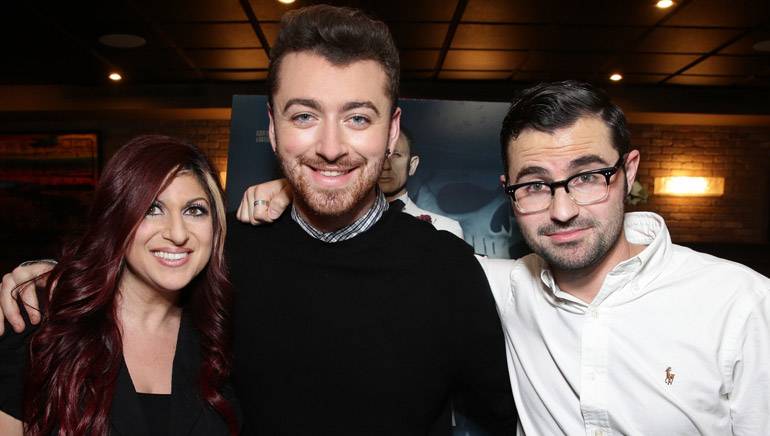 Pictured (L-R) at the studio’s screening of ‘Spectre’ are: BMI’s Director of Film/TV Relations Anne Cecere and “Writing’s on the Wall” co-writers Sam Smith and Jimmy Napes.

BMI’s Director of Film and TV Relations, Anne Cecere, proudly spent a whirlwind 48 hours leading up to the opening of the new blockbuster Bond film, Spectre, supporting  the music by GRAMMY-winning BMI via PRS songwriter Sam Smith and score by award-winning BMI composer Thomas Newman. First, the Society of Composers & Lyricists (SCL) held an advance screening of the film with a Q&A, moderated by renowned journalist Jon Burlingame, featuring GRAMMY-winning Smith and co-writer Jimmy Napes, the scribes behind the film’s original theme song “Writing’s on the Wall.”  Along with the film, which is now number 1 at the box office, the song hit number 1 on the UK charts, the first of any song in a Bond film to do so. After the SCL screening, Cecere accompanied the gifted writers to a private studio screening of the movie, with a celebratory luncheon in between.

Returning to the Bond legacy by scoring the new film is BMI composer Thomas Newman, who was nominated for the Oscar in 2013 for his score to Skyfall, for which Adele (BMI via PRS), captured the award for original song.