BMI has proudly partnered with radio station Alt 983 to present Eastside Sounds, BMI’s free quarterly showcase recently launched to highlight BMI performers at the Basement East, better known as The Beast, in East Nashville. As part of the new partnership, Alt 983 listeners will now be able to tune in to the alternative radio station to hear the featured artists in exclusive on-air interviews and special performances in the week leading up to each show.

The latest iteration of the showcase will be held Wednesday, October 14, at 6:30 p.m., following a BMI-sponsored happy hour from 6-6:30 p.m. Featured performers include Americana/folk artist Liza Anne and rock group Apollo.

“The musical landscape of Nashville is richer than ever,” says Penny Gattis, BMI’s Director, Writer/Publisher Relations. “There is no better way to showcase BMI performers and the diverse music coming out of Nashville than partnering with Alt983, iHeart Radio’s destination for new alternative music. East Side Sounds is poised to be the premier showcase in Nashville for emerging alternative music.”

The Beast is the sister venue to the legendary Basement venue, home to BMI’s quarterly “Buzz at the Basement,” which also features up-and-coming BMI songwriters. Opened earlier in 2015 and located at 917 Woodland Street in East Nashville, The Beast has quickly become another can’t-miss destination to catch well-established artists alongside on-the-verge acts. 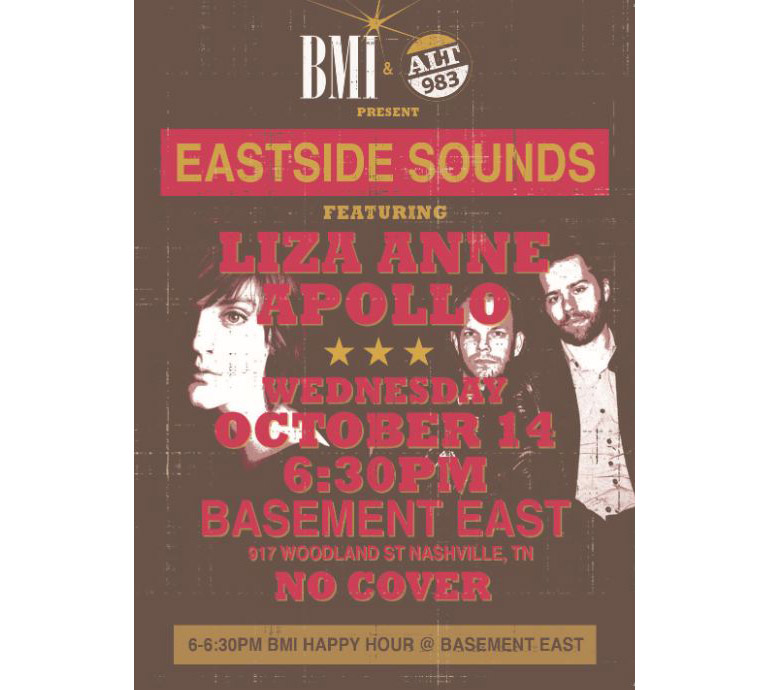