Posted in MusicWorld on January 7, 2011 by Ari Surdoval 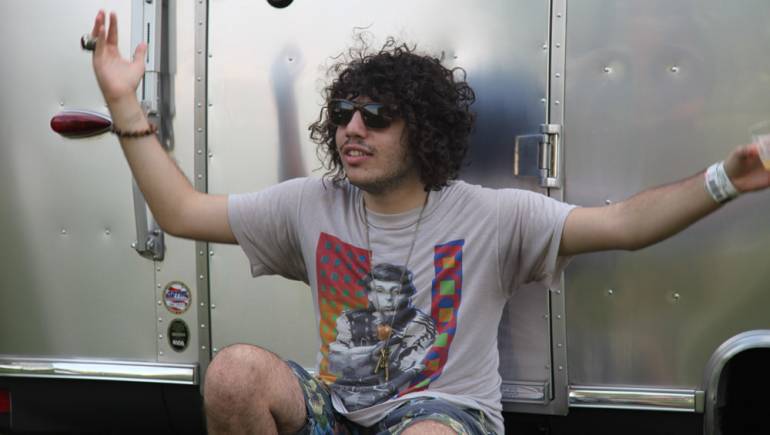 Benny Blanco, the 22-year-old songwriter and producer with a string of hits to his credit, is driving through Los Angeles talking about how he has always loved music. Since he was a kid growing up in suburban Virginia—pulling out the stereo in the middle of his parents’ dinner parties to dance and lip synch to Prince, bugging his big brother to buy him the CDs with the Parental Advisory stickers, scribbling rhymes inspired by Eminem and Nas in his notebook and dreaming up beats instead of paying attention in class, skipping school to—“wait, I don’t want to say too much,” he says, cutting himself off. “My mom is sitting right next to me. I’m taking her to the Video Music Awards.”

Now, if this were a Benny Blanco song, that would be the breakdown, where the song locks on a lyric and stops for a second, just long enough to make you say, wait, what? before kicking back in with a huge sticky synth candy hook that sounds like a bubblegum 747 running on Red Bull taking off into your skull.

You can hear Blanco’s touch—from additional production to co-production to co-writing—on such hits as Katy Perry’s “I Kissed a Girl,” “California Gurls” and “Hot n Cold,” Ke$ha’s “Tik Tok,” “Blah, Blah, Blah” and “Your Love is My Drug,” Britney Spears’ “Circus,” and 3OH!3’s “Don’t Trust Me.” But despite his incredible string of successes, Blanco is far more comfortable praising the artists he has worked with than talking about himself.

“When I go into the studio with an artist,” Blanco says. “I just try to fill in the blanks and learn from everybody.”

It’s a humility and a respect for other artists that Blanco seems to have had from a very young age. He started at just 13, pounding the social media pavement—MySpacing anybody he thought might give him a listen.

“I was hitting up everyone!” Blanco laughs. “I was emailing Polow Da Don. I was emailing Jimmy Iovine. I would write the dumbest emails. Nobody would ever reply. Except Disco D—he wrote back. I pretended I needed studio time. Then I got up there to meet with him and I was like, ‘I don’t really need studio time. I just want to work with you.’ So he listened to my stuff and he liked it. He said I could be his intern under one condition. He was going out of town and said if I could book his studio for the whole three days, I was in. So I did.”

It was a big break, but not an easy one. Blanco became a fixture at the studio, running errands and doing scheduling, which eventually led to collaborations with Spank Rock and a deal with Downtown Records when he was just 18.

“It seemed to happen overnight,” Blanco says. “And I was totally happy and satisfied doing that. I was like, ‘I can do this for the rest of my life! Live on people’s couches! This is awesome!’ Then I had one publisher offer me a deal. My manager and I were both so new to the game. We didn’t know what a publishing deal was. All these people wanted to sign me, but I only had like two beats. I had two beats and one song and this album I did with Spank Rock. But I guess the stars just aligned. I didn’t know what was going on. I don’t even know what’s going on now! It’s just unexplainable.”

“What’s going on now” is an incredible streak of hits by an extremely creative, spontaneous and ambitious young producer and songwriter whose humble approach has him seeing it all as hard work and luck.

“I just want my stuff to sound like nobody else’s,” Blanco says. “Like, you know those wine openers that look like a man doing jumping jacks? I was in the studio the other day and I used one of those, making it go woosh-woosh-woosh-woosh-woosh and it turned out to be a great part of the song. Or I’ll use one of those ‘Hava Nagilah’ keyboards, like the ones you got when you were a kid. I’ll use a VCR turning on, the kind that goes boop, you know? I’ll use anything. I hear music everywhere. There’s no stopping it.”

Written by Ari Surdoval, a writer and editor living in Nashville, TN. Check out his blog, The Big Get-Even.