Posted in MusicWorld on March 9, 2009 by Jonathan Marx 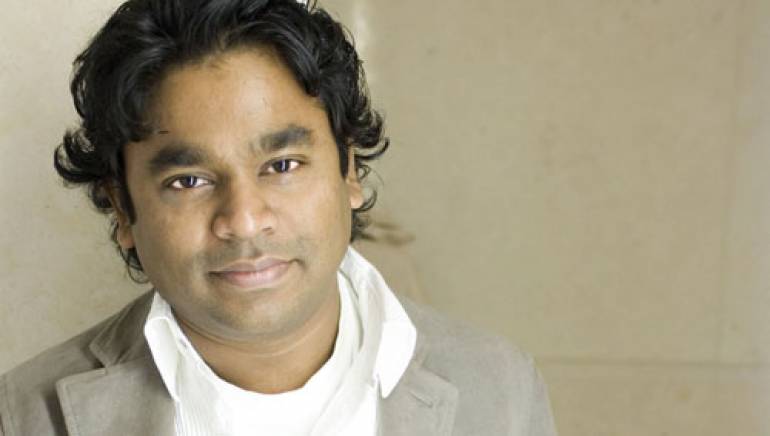 This would seem to be A.R. Rahman’s moment. The 43-year-old composer recently became the first Indian musician to win a Golden Globe Award, and his work on the soundtrack to Danny Boyle’s surprise hit film Slumdog Millionaire has also earned him three Oscar nominations and two Oscar wins: “Jai Ho,” featuring music by Rahman and lyrics by Gulzar, claimed original song honors and he also walked away with the statuette for best original score. Jolted by the bracing rhythms on the movie’s soundtrack, the American media have suddenly awakened to Rahman’s singular talent, showering him with adoring feature stories and enthusiastic reviews. In his homeland, however, Rahman is already a superstar, with sales of more than 100 million records and more than 100 film scores to his credit. It’s hard to imagine an American movie composer reaching that level of popularity, but in India, with its teeming Bollywood film industry, cinema serves as the country’s main source of popular music. The question now is whether Rahman’s newfound success in the West will help lead to a resurgence of interest in Indian music that probably hasn’t been seen since sitarist Ravi Shankar captured the world’s attention in the 1960s. “I think [the Golden Globe win] is probably the first major breakthrough, and it will create a bridge between audiences,” Rahman recently told Billboard magazine. “With the film winning so many awards and getting so much attention, I think it will lead to a crossover and more people exploring Indian music.”

It can’t hurt that the Slumdog Millionaire soundtrack also features the participation of British-Sri Lankan vocalist MIA, whose presence lends the project an edgy, caustic energy. But Rahman’s score is a marvel in its own right, incorporating skittering electronic beats, atmospheric synthesizers, traditional Indian instruments, insistently catchy melodies, r&b balladry and the Siren-like vocals of celebrated Bollywood singers such as Mahalaxmi Iyer.

Musical mixing and matching has long been a hallmark of Bollywood composers, who have been known to incorporate everything from fuzztone guitars to reggae and disco into their music. Rahman’s collaboration with Boyle begged for something even more original. “He wanted something new, something authentic to the Hindu feel on the street, so we started at that point,” the composer told The Hollywood Reporter.“The role music plays in this is [to add] excitement and to provide somewhat of a traditional vibe that surprises as well.”

The result is a pulse-quickening accompaniment to the action onscreen, which includes moments of humor, tragedy, brutal violence and intensely romantic yearning. Much like the music in the background, the film has an astonishing scope, setting the adventures of an unassuming Mumbai youth against the backdrop of a rapidly transforming India.

It is fitting to Rahman’s own sensibilities that Slumdog Millionaire ultimately ends on a note of triumph. The composer firmly believes that art has the power to transform the world, and he has done his own part by starting a foundation to fight poverty in his homeland and a music school that provides young Indian musicians with the skills they need to thrive in the 21st century.

“After a point of time, when you get success and fame, money and everything, the purpose of life has to be redefined,” Rahman recently told Forbes magazine. “For me, I think that purpose is to build bridges. Artists can do that very easily, more than politicians. All these things make me run faster; otherwise I’d get complacent.”