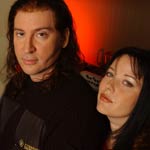 The Matrix is one of the most successful production/songwriting teams in modern pop. Comprised of BMI affiliates Lauren Christy and Scott Spock and Graham Edwards (PRS), they just finished their debut album, which will be released on Columbia Records this summer. Additional current projects include producing new Interscope artist Samantha Moore, Hillary Duff and The Backstreet Boys, plus writing and producing for Cheyenne, the young winner of TV’s Star Search now signed to Columbia Records. They will also be writing the music for and scoring the upcoming Disney feature film All Access.

Nominated for two 2004 Grammy Awards – including Producers of the Year – their studio wizardry and hook-heavy songs have powered the multi-platinum success of Avril Lavigne (“Complicated,” “I’m With You,” “Sk8r Boi”), the mainstream pop of Hilary Duff (“So Yesterday”) and the artful wordplay of Jason Mraz (“The Remedy”).

Co-writer and lyricist Christy, a Golden Globe and American Music Award nominee, was previously a critically acclaimed Mercury Records solo artist who has cuts on film and TV soundtracks, including Batman, Great Expectations, The Color Of Night and Buffy the Vampire Slayer.

Spock, a former jazz trumpeter who is the arrangement expert of the Matrix, has also scored for film. Among other writer/producer credits are Chaka Khan, MDFMK and the Backstreet Boys.

Edwards, who is married to Christy, is a songwriter/bassist who has worked as a sideman, songwriter and/or producer with artists such as Go West, Robert Palmer, Adam & the Ants, Mick Jagger, Celine Dion, Janet Jackson and Natalie Imbruglia.