Posted in MusicWorld on September 29, 2005 by Bruce Britt 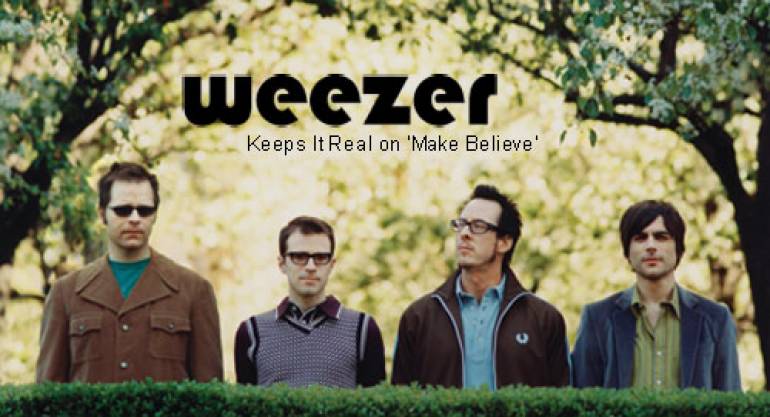 Heartily breaking with decades of jock-rock tradition, Weezer’s self-titled 1994 debut album was that rarity of rarities: a pop record that farcically celebrated willful underachievement. The band’s approach was manifest in the hit single “Buddy Holly,” which detailed the plight of a haplessly nerdy couple tyrannized by local bullies.

The band’s affection for the underdog is apparent in their video “Beverly Hills,” in which the quartet bemoans its misfit social standing while romping with fans and Playmates at Hugh Hefner’s Playboy mansion. The result is a broadly appealing fantasy clip that combines the self-deprecating humor of Nirvana, the bling-brandishing charm of rap videos, and the wink-wink cheekiness of vintage Weezer.

Treading the road less traveled is a habit for the members of Weezer. Founded on Valentine’s Day, 1992, the band was signed to DGC Records (Geffen) after a mere 16 months together. Produced by Ric Ocasek of Cars fame, Weezer’s self-titled debut album sold over two million copies on the strength of three singles/music videos: “Undone (The Sweater Song),” “Say It Ain’t So” and “Buddy Holly.”

The group emerged from their hiatus with their pop instincts intact. The band’s 1997 sophomore disc, Pinkerton , won raves and gold certification. In 2001, The Green Album was released to a Top 5 welcome, fueled by the infectious tracks/videos “Hash Pipe” and “Island in the Sun.” The following year saw the release of Maladroit , a record that solidified Weezer’s reputation as a band with a rock-solid musical heart.

During their current Make Believe world tour, Weezer has performed before a massive, marquee-like “W” insignia that is an obvious aesthetic homage to their childhood influence, KISS. As they enter their second decade, the members of Weezer are still pursuing the rock & roll dream on their own comic terms.