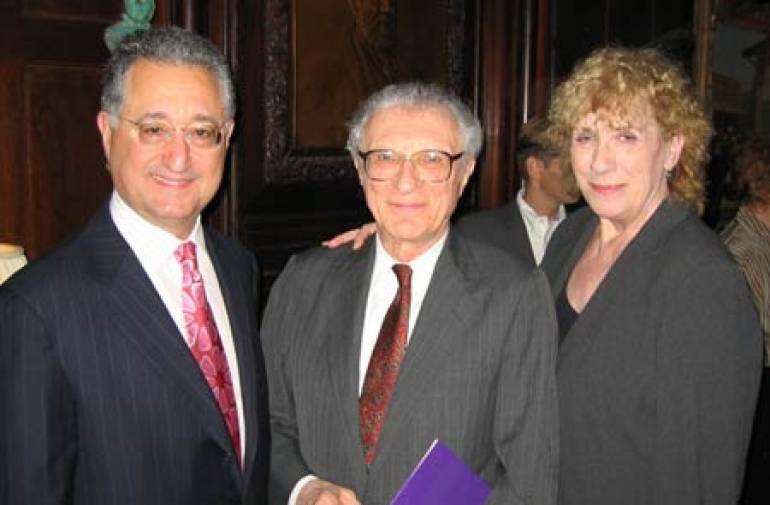 BMI composer/lyricist Sheldon Harnick was honored by Encompass New Opera Theatre on May 2 at a gala celebrating his 80th birthday. The festive event, held at the historic National Arts Club in New York City, featured a wine reception and a one-hour performance tribute, as well as birthday cake and a champagne toast.

Harnick, who has served for the nearly 30 years as co-chair of the Encompass Advisory Board, is the winner of the Pulitzer Prize, two Tony Awards, two Grammy Awards, the Songwriters Hall of Fame Johnny Mercer Award, the American Academy and Institute of Arts and Letters Marc Blizstein Memorial Award, as well as three gold records and a platinum record. He is a member of the Dramatists Guild and the Songwriters Guild of America.

Born and raised in Chicago, Harnick began studying the violin while in grammar school, going on to earn a Bachelor of Music degree from Northwestern University School of Music in 1949. Though his focus had been the violin, he eventually decided to try his luck as a theatrical lyricist in New York City.

His first song in a Broadway show, “The Boston Beguine” for NEW FACES OF 1952, introduced theatergoers to the wry, subtle humor and deft wordplay indicative of a Harnick lyric. Over the next several years he contributed lyrics or whole songs to such vintage revues as JOHN MURRAY ANDERSON’S ALMANAC, THE SHOESTRING REVUE and THE LITTLEST REVUE. In 1956, Harnick joined up with fellow BMI composer Jerry Bock and the pair began writing their own musicals, resulting in such award winning works as THE BODY BEAUTIFUL (1958), FIORELLO! (1959), SHE LOVES ME (1963), and the 1964 musical masterpiece, FIDDLER ON THE ROOF.