Posted in MusicWorld on January 26, 2004 by Kevin Zimmerman 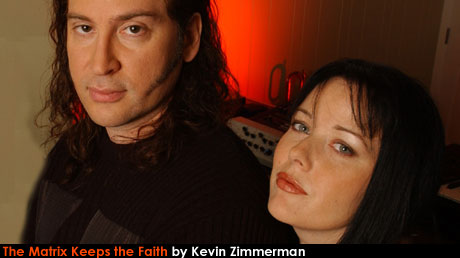 First things first: The hot songwriting/production trio known as The Matrix has nothing to do with Keanu Reeves, or running up walls in slow motion. "It was hard to constantly describe the three of us," Matrix member Lauren Christy told one interviewer about the outfit's early days. "So we came up with the name 'The Matrix.' The matrix is a name for the womb, or the rock, which everything comes from."

That led to songwriting and production on Lavigne's "Complicated," "Sk8er Boi" and "I'm with You" singles. In the months since, The Matrix has worked with everyone from Ricky Martin to Robbie Williams to Britney Spears: such hits as Liz Phair's "Why Can't I," Jason Mraz's "The Remedy (I Won't Worry)" and Lillix's "It's About Time" all bear the polished, beat-friendly Matrix approach.

In July came word that the trio had signed a recording deal with Columbia Records, with its first release due next spring. Throughout, the team has remained committed to crafting songs in a straightforward fashion.

"A song is a work of art," Spock told one interviewer. "You just don't say, 'I sketched this with a pencil and I'll color it in later,' [it's] 'here's my piece of art.' You sit down and all the pieces start evolving together and that's kind of how we work. When we get done, it's usually a finished master.

"We all do everything: creating melodies, lyrics, and tracks," Spock continued. "When we write, we like to sit down with a guitar and piano, rather than starting with a track. Graham plays guitar and bass, Lauren plays piano, and I play piano and trumpet. Also we all sing, often on both our demos and the masters."

Whether The Matrix will become a household name like The Neptunes remains to be seen; The group's members have said they have little interest in being as omnipresent as Pharrell Williams's hugely successful outfit, but the Columbia deal would seem to hint at a possible change in that attitude. For now, however, The Matrix plans to simply continue plying its trade.

"It just goes to show, that if you keep working hard, it can turn around with one hit song," Edwards said. "You have to keep the faith, and keep writing. It all turns around."