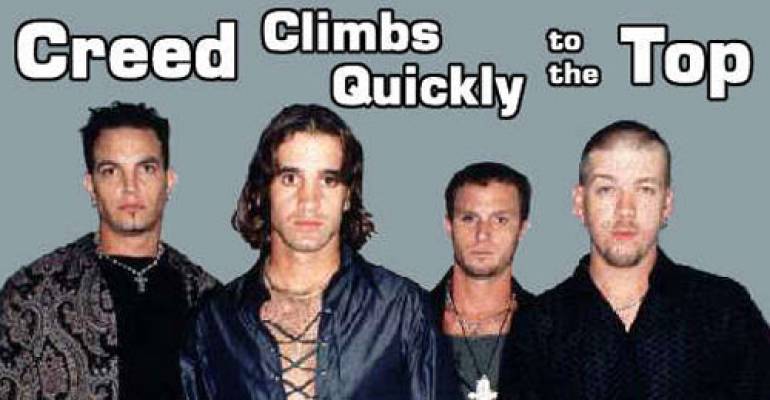 On the maiden single from their Wind-Up Records/BMG album Human Clay, Creed vocalist Scott Stapp poses the musical question: “Can you take me higher?” The singer received his reply mere days after the album’s release. Human Clay debuted at number one on Billboard’s Top 200 Album’s chart, outselling new releases from Garth Brooks and the highly touted hip-hop duo, Method Man and Redman. Now, Creed is credited with resuscitating rock music and critics are scrambling to explain the band’s appeal.

Band members attribute their success to pent-up consumer demand for hard rock. In an interview published recently in Guitar One magazine, guitarist Mark Tremonti said: “I think there were a lot of people sitting at home going, ‘Man, music sucks now because there’s no rock!’ So when they heard us, they were going, ‘Great! At least there’s one band out there playing straight-up, old school rock & roll with big guitars’.”

The band’s appeal, however, extends well beyond its music. Creed enjoys an enviable, almost familial rapport with their fans. The quartet offered a free digital download of the single “Higher” a full month before the release of Human Clay. The download created a grassroots street buzz and demonstrated how the Internet can be used to stoke consumer interest.

Hailing from Tallahassee, FL, Creed recorded their first demo for a paltry $6,000. The recordings resulted in an independently produced CD titled My Own Prison. The disc caught the attention of BMG, which inked a distribution deal with the band. To date, My Own Prison has sold over 4 million copies and yielded four number one rock radio singles, including “My Own Prison,” “Torn,” “One” and “What’s This Life For.” Creed is the only band in history to score four #1 Rock Radio singles.