Peermusic and RCA Records marked the 75th Anniversary of the Bristol Sessions with reunion events honoring descendants of the artists recorded by Ralph Peer during the landmark sessions, including Jimmie Rodgers, Ernest Stoneman and the Carter Family (A. P., Sara and Maybelle). 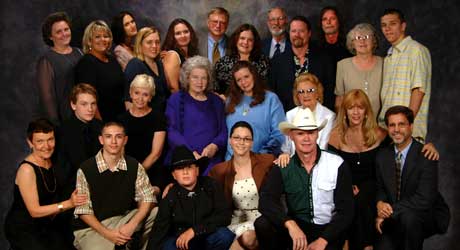 Janette Carter, daughter of A. P. & Sara Carter; June Carter Cash, daughter of Maybelle Carter, and her daughter, Carlene Carter; Patsy and Roni Stoneman, daughters of Ernest Stoneman; and the great-grandchildren of Jimmie Rodgers were among the dozens of family members who gathered in Bristol, Tennesse at a dinner hosted by peermusic Chairman & CEO Ralph Peer II, son of Ralph Peer.

The dinner was held at the State Line Grill on State Street, only a few blocks from the site of the recordings (July 25 - August 5, 1927). Ralph Peer and peermusic Nashville's Kevin Lamb welcomed the 100-plus guests. On behalf of RCA Label Group, Leslie Paulin extended greeetings from RLG Chairman Joe Galante; the Bristol Sessions on RCA Victor are the genesis of the current RCA Label Group catalog and roster.

"Will The Circle Be Unbroken" finale

In the summer of 1927, Victor Talking Machine Company talent scout Ralph Peer brought an electric recording machine to the Tennessee-Virginia border city of Bristol. For 10 days, in a makeshift studio with state-of-the-art equipment, Peer recorded 76 songs from 19 different groups, in the process discovering the two most important acts of early country music, the Carter Family and Jimmie Rodgers, and laying the foundation for the country music industry. The Bristol Sessions ultimately proved to be one of the most pivotal and influential episodes in American cultural history.

The children of Rodgers's grandson, Jimmie Dale Court, were on hand for the event: Dixie Haslett, with husband Terry; Cody and Austin Court, with mother Karen; and Benjamin Boyle-Court, with mother Cathleen Boyle. A special member of the Rodgers delegation was Pat Ward, whose mother, Elsie McWilliams, was Rodgers's frequent co-writer [and aunt of his wife].

The evening culminated in a musical tribute led by peermusic writers Rick and Janis Carnes and their daughter, Bevin, of Rodgers's "Peach Picking Time Down In Georgia," Stoneman's "The Sinking Of the Titanic," and the Carters' "Keep On the Sunnyside" and "Will The Circle Be Unbroken."

The peermusic/RCA reunion event was held in conjunction with the Birthplace of Country Music Alliance's Diamond Anniversary Celebration of the 1927 Bristol Sessions.

Peermusic also visited the Carter Fold in nearby Hiltons, Virginia for the 28th Carter Family Memorial Festival. The Carters were presented with platinum plaques commemorating six million sales of O Brother, Where Art Thou?; the soundtrack includes the A. P. Carter classic "Keep On The Sunnyside" and Maybelle Carter's "In The Highways."