The guest list was a "Who's Who" of country music makers when BMI Nashville hosted a surprise party for producer Byron Gallimore to celebrate his being named Billboard magazine's #1 "Hot Country Producer" for the third year in a row. Billboard Nashville bureau chief Phyllis Stark gifted Gallimore with a framed listing from the magazine, explaining that his #1 designation represents an astounding 87 charting songs in three years. BMI's David Preston read notes from BMI President & CEO Frances W. Preston and from Jo Dee Messina, who has teamed with Gallimore for three albums. Preston also presented the producer with an engraved pewter tray to complement the many pewter BMI #1 cups he has earned through the years. 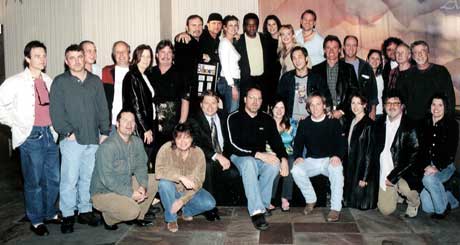 Among Gallimore's producing credits are the following hits: