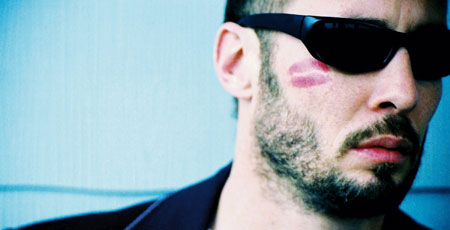 It’s not often that an artist cuts a record solely for the good of humanity, but by golly, that’s just the case with Paul Thorn’s latest, Are You With Me? (BackPorch).

That might’ve been a joke, but if you know Paul Thorn or his music, you know there’s at least a grain of truth in all his funny story songs, if not complete truth about a serious subject merely told in a funny way. But on Are You With Me? , Thorn gets serious.

“The reason I did an album of relationship songs is that I hear a lot of love songs that give advice that is really stupid,” says the 40-year-old father of two. “I want to say things about love that are useful ! I’d never call any names -- but these so-called masculine singers…they’re singing stuff that’s gonna get people killed! ”

From his critically acclaimed debut Hammer and Nail in 1997, to 2000’s Ain’t Love Strange , up through his last, Mission Temple Fireworks Stand , Thorn is known for offering up wise and witty story songs firmly entrenched in the roots rock genre. Are You With Me? , however, produced by Thorn and his longtime mentor/writing partner Billy Maddox, is more adult -- softer, jazzier. More refined . But don’t think it’s stuffy or staid. It is still, after all, Paul Thorn.

From the beautiful ballad, “If You Can’t Love Me Forever,” about former lovers offering themselves one more time even though the aftermath will bring agony, to “Love Will Find You,” which says you’ve got to let go of the old to find the new, Thorn does indeed show us that serious, wise side. Of course, there are also numbers imbued with that hallmark humor, like “She Won’t Cheat On Us,” about two men who discover they’re seeing the same woman, and “That’s a Lie,” about someone who tries to befriend you while he’s chasing your lover. Thorn is most effective, though -- and a bit surprising -- in the exquisite straight-up pain of “Almost What You Need.”

With the new subject matter and the new sound, which includes a palpably sensuous nuance, achieved, quips Thorn, by “a new ‘sexy’ button in the studio,” Thorn is adding a whole new audience to his legion of fans. He toured with Huey Lewis this summer, finding great favor with Lewis’s 30- and 40-something fans, and revealing more of himself to long-term devotees.