Posted in MusicWorld on November 16, 2003 by Jon Matsumoto 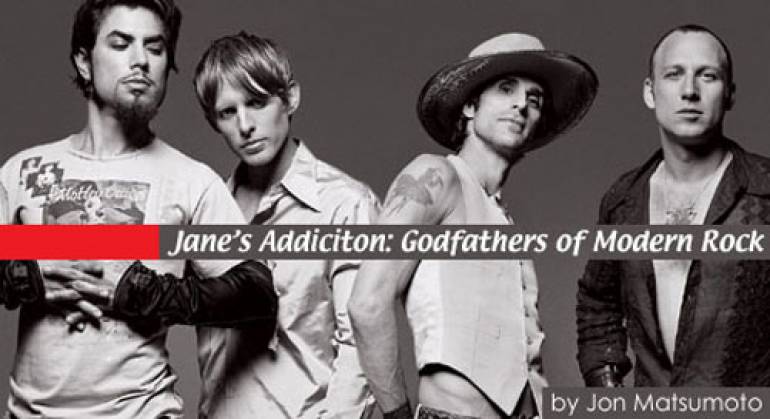 Under a beautiful August night sky at the Verizon Amphitheater in Irvine, California, Jane's Addiction launched into a sublime version of its signature song, "Jane Says." Some fans lit cigarette lighters while many in the sold-out crowd sang along to the alternative rock anthem.

It was a chilling, unforgettable moment for Jane's Addiction. The group from nearby Los Angeles was not only celebrating its homecoming as headliners of the recently revived Lollapalooza festival (a multifaceted tour originally conceived by Jane's vocalist Perry Farrell in the early '90s), but it was celebrating its formal return to the rock scene with its first album of new songs in 13 years.

Both the Strays comeback CD and its performances on the first Lollapalooza tour in seven years, have recently helped to cement Jane's Addiction's status as modern rock godfathers. The group helped establish the groundwork in the late '80s for the epochal grunge movement that soon followed.

Not long after it first emerged in 1986, Jane's Addiction was being labeled the best and most intriguing young band in Los Angeles. Merging punk, metal, art rock and folk into a unique and compelling sonic stew, the quartet was often labeled the "new Led Zeppelin."

Inter-band tensions and substance-abuse problems contributed to the band's breakup in 1991 just as it seemed poised to rocket to superstardom.

The immense promise of Jane's Addiction appeared in danger of never being fully realized or appreciated. Fortunately, Farrell reconvened the group in 1997 for a six-week tour and an album called Kettle Whistle that consisted of live tracks, outtakes and two new recordings.

The group's real test occurred when it released Strays this summer. Would Jane's Addiction still be viewed as relevant in today's vastly different rock scene? Judging by the music, the answer is a resounding "yes."