Posted in MusicWorld on January 9, 2002 by Gerry Wood 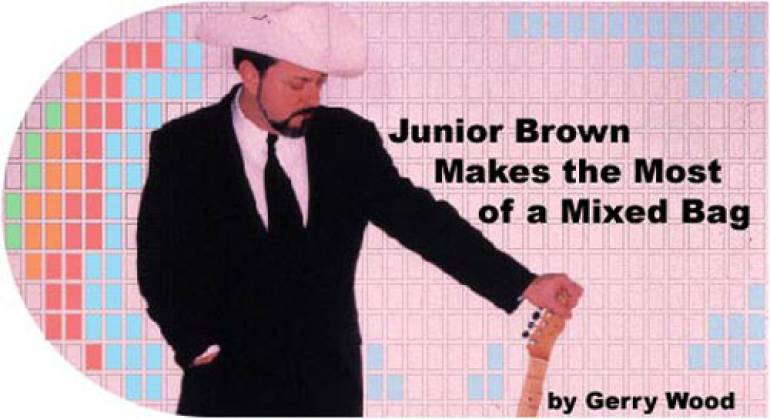 Some artists experiment with genres beyond their own familiar musical turf, but no one does it with more abandon than Junior Brown. His new album, Mixed Bag, is just that: a potpourri of pop, Dixieland, bluegrass, jazz, country, and some cross-cultures.

"I've never prejudiced myself against any type of music," Brown advises. "It has to be something I can really sink my teeth into if only for a song or two. I try to add my style and then move on."

Junior's previous album included a psychedelic foray with a former member of the Jimi Hendrix Experience. He's parted the musical waters with a surf medley and plans to pursue some northern New Mexico folk music. "It's unique to that area, and I'd like to put my little twist into some of that."

Brown's booming baritone flavors every song he stylizes while his blazing guitar licks are becoming legendary. He invents some of those instruments, including a steel guitar merged with a six-string regular guitar.

Junior first took to the keyboards. "I was making up melodies on the piano before I could talk," he recalls. His father's big-band 78s made an impression, along with the stars of pop, rock and country, especially Ernest Tubb. "He had his own style," praises Junior, "and he appreciated people who had their own style."

Junior played in bands, taught guitar, backed country artists on guitar, and finally landed a deal with Curb Records where he has churned out six albums, winning four Grammy nominations. He loves the craft of songwriting, citing such favorites as Hoagy Carmichael, Cindy Walker and Harlan Howard. "A lot of times I like the writers better than the performers," he explains. "Sometimes I sit down and write to make myself do it, but most of the time it will be a spur-of-the-moment idea and I'll just grab a pen."

To clear that kaleidoscopic mind of his, Brown takes to the hills. "I like to have a little time to get up into those New Mexico mountains, out in nature, and enjoy it."

Then it's back to his latest musical mélange. "It's throwing different ideas out but still being true to the traditional honky-tonk music that's the backbone of it all. You can try other things but you always have to remember who you are and what your particular style is that you're contributing to these different kinds of music. Otherwise, you don't really have a rudder and you sort of drift whichever way the wind blows."