Posted in MusicWorld on June 25, 2012 by Nicole Keiper 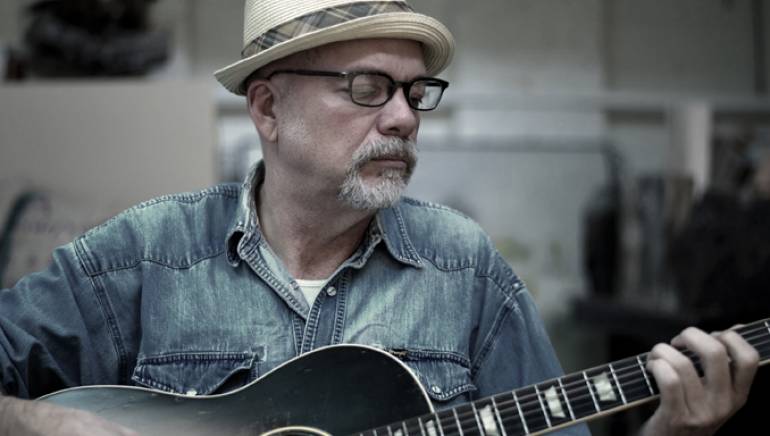 Nashville multi-instrumentalist Phil Madeira has been seen and heard alongside Emmylou Harris, playing guitar, accordion and singing as one of her Red Dirt Boys; prior, he spent a decade with Americana hero Buddy Miller. He hasn’t been such a slouch in the writing room, either, with songs cut by the likes of Toby Keith and Alison Krauss.

Madeira’s latest trip into the studio, though, has marked a particularly rewarding milestone. The culmination of some three years of planning, writing, fundraising, recording and polishing, the new Mercyland: Hymns for the Rest Of Us project both shows the range of talented company Madeira keeps and represents a fully realized dream. At the onset, he set out to create the collaborative album with one overarching goal: to explore the idea, “What if God is love?” alongside a varied group of writers and performers, who’d bear varying takes on the concept. Released in April of 2012 and featuring a set of friends old and new (Harris, Miller, jazz great John Scofield, breakout folk duo The Civil Wars, pop voice Mat Kearney), Mercyland’s thus far been receiving a nice share of the love it sought to explore.

1. You co-wrote with a mix of new and familiar folks on Mercyland – did you have any surprises or new experiences writing with those folks, based on a concept like this?

One of the surprises was “Mercyland,” which I wrote with my partner Merrill Farnsworth – we wrote it before I conceived this project. Once I started the record I knew that song belonged on it, but I didn’t know the name of the record would be Mercyland. So that was a surprise, to have kind of written a tune beforehand which encapsulates the whole theme of the record.

There were some (other) great surprises. Writing with Mat Kearney was really a treat, because I had heard about him for a long time and met him at a cocktail party, and he knew my work from playing with Emmylou Harris and Buddy Miller and I just knew of him. I had heard he was good but I hadn’t listened to him. But I just thought, ‘I like this guy.’ Based on the guy’s personality without hearing anything he did but also knowing his reputation among people I respected, I invited him to partake, and I just found him to be such a deep guy and soulful person and right on board with the idea. And I love his song (“Walking Over the Water”) because it’s one of those songs where, “OK so if I’m gonna get personal and thank God every time something great happens, what do I do when awful stuff’s happening, where do I put that, what’s the compartment?” I like that we came up with a song that there’s no easy answers in – which would be probably my main issue with a lot of religious music.

Writing with the Civil Wars, that was the biggest surprise. We wrote that song (“From This Valley”) three years ago when I started this thing, I had no idea that they would explode like they’ve done. I thought it was neat to have these people on my project that no one knew of, and of course it took me so long to finish the project, by the time I was done they were the next biggest thing since peanut butter.

2. Did you find a different approach to spirituality coming from such a broad mix of collaborators?

I think so. Not everyone was coming from the same specific page, and there might even be people who don’t even have a page, if you know what I’m saying. But everyone resonated with the idea that I approached them with.

3. For Mercyland, The North Mississippi Allstars take on your song “If I Was Jesus,” which Toby Keith cut previously. What’s the experience of hearing your songs reinterpreted by vastly different artists?

Toby’s version was very commercial, and it was on a very successful record, so I was really delighted that it was recorded. And Toby’s version was very similar to the version that (co-writer) Chuck Cannon and I demoed. With the Mississippi Allstars, when (singer/guitarist Luther Dickinson) came in he just called me up and he was like, “Hey, the version I want to do, I’ve worked out a 6/8 thing,” and I loved it. It’s just those guys and me playing an accordion and Byron House playing an upright bass, and it’s live and it’s broken. To some ears the song may sound like it’s devolved from Toby’s original recording. To my ear, it sounds like the music and the arrangement have actually caught up with the real meaning of that song, which is all about sacrifice and all about, “If I was Jesus, I’d lay down my life for you – I’d love you that much.” Luther sings it with this sort of brokenness that I think represents the way I write. That’s what I want to hear – I want to hear the soul of a man.

4. Do you catch places where the other artists you play for are informing your songwriting?

5. What advice would you give to budding songwriters?

6. Have you written anything in particular that you feel is the best encapsulation of who you are as a writer?

Ironically I think I wrote that song 20 years ago. I’m not sure if it qualifies or if I just got lucky then. But I think I have two songs. One is on this project and Buddy (Miller) sings it, it’s something I wrote probably in my darkest hour and it’s called “I Believe in You.” I don’t know if I’ve written a song that’s any better. And one other, called “Jagged Heart,” which is a similarly introspective song.

7. What three songwriters would you say informed your work the most?

Bob Dylan – it goes without saying I think. Randy Newman, who can at once be so heartbreakingly vulnerable and then so acerbically cynical. And Blind Willie Johnson. I do have a fixation with spiritual music, but I think Blind Willie Johnson is the champion of getting to the point and getting to the essence of what spiritual music’s about. And also combining blues and spirituality.

8. How about three albums that do the same?

The Beatles’ Abbey Road, Paradise & Lunch by Ry Cooder and A Go Go by John Scofield. I think all three of those records highlight artists at the top of their game. And all those records have just really influenced me. To this day I don’t get in my car and take a long journey without John Scofield’s music playing. And he and I are friends – he’s on this Mercyland project, which blows my mind.

9. Did Mercyland ultimately become what you hoped?

I feel really proud, simultaneously proud and humbled by following this dream. I think this project represents me paying attention to who I am and yet trying to fit it into the context of outside of the Christian music industry, just making an Americana record that’s got a deep soul to it. I hope that it matters to people beyond myself. That’d be great.