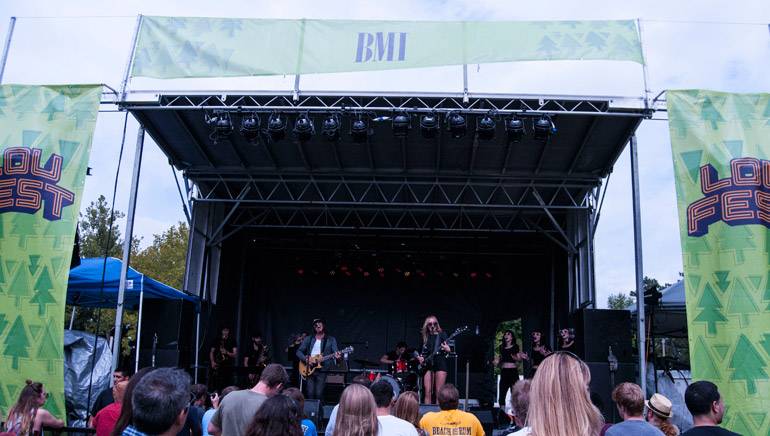 Eulene Sherman and Angelo Petraglia, also known as the Jane Shermans, show off their unique mix of country and blues. Photo: Josh Bensonian

Broadcast Music, Inc. brought ten impressive bands from all parts of the country to its stage at LouFest in St. Louis on September 6 and 7 to promote fresh talent that the Company represents in every genre of music. The first day featured a wide range of music, opening with Colin Lake, a bluesy slide-guitarist, who brought high energy with a gospel-style. The Jane Shermans, out of Nashville, played next, rocking their country and blues fusion. Alanna Royale and her band previewed soulful new tracks off their upcoming album Achilles, followed by a set from indie rockers Roadkill Ghost Choir. Black Pistol Fire brought the first night to a close with a rock n’ roll set featuring simple beats under heavy guitars.

Day two was also a genre-rich day started by Americana rockers Old Salt Union, followed by Dylan McDonald and the Avians, whose vintage 1970s rock sound continued to keep the crowd moving. Marc Scibilia displayed his singer-songwriter talents crooning songs off his latest EP. Indie brothers AJR came down from their home state of New York to show off their electronic-pop tunes, and to cap off the event, the Kopecky Family Band closed out with their big, indie-rock sound.

The festival was attended by a record number of people, who enjoyed four stages of music, an art market, an eco-friendly vendor section and a food court full of local St. Louis restaurants.