Posted in MusicWorld on November 16, 2003 by Rob Patterson 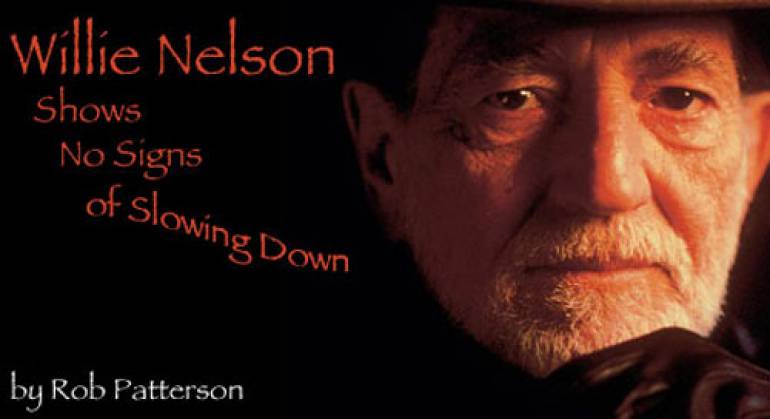 Not long ago, Willie Nelson sang about how "still is still moving to me." That Zen-like observation captures well the restless creative spirit that Nelson remains at the ripe young age, at least in Nelson's case, of 70. Few musical artists have enjoyed a career of such stunning accomplishments, diversity and longevity as Nelson, who shows no signs of slowing down.

Starting out in the roadhouses and honky-tonks around his Central Texas hometown of Abbot, Nelson has been making music since his teens and writing songs even longer. "I started writing poems when I was about five, and then when I learned to play a few chords on the guitar, started putting melodies to them," says Nelson. "I was writing about things I had no idea about. There was no way a five- or six-year-old kid could write songs about broken hearts. So it has to come from somewhere else."

Even in his days as a working musician in the Lone Star State, he began developing his own idiosyncratic way of tackling a song. "I got tired of singing the same songs the same way," he recalls. "Every night we'd do 'Fraulein' or we'd do 'San Antonio Rose' or something like that, and I just started playing with it, and realized that I could do that. Then I started doing it more and more."

When Nelson moved to Nashville in 1960 with a few hits on small labels under his belt, he first found work as a sideman for Ray Price, whose Pamper Music also signed Nelson as a songwriter. Hits he wrote, like "Hello Walls" for Faron Young, "Crazy" for Patsy Cline and "Night Life" for Price, established a string of superb songwriting that continues until today. They also helped him win a deal with RCA Records, though his unique vocal phrasing and eclectic musical approach never found favor in Music City.

"I never did really fit into any of them, you know, the phases and stages and things that the music always goes through. It would be hard to quit what you're doing and try to conform to what's going on on the radio. It would be too much of a change," he says with a laugh.

After a decade in Nashville, Nelson moved back to Texas after his house burned down just before Christmas. It was back in his home state where he discovered an audience beyond the usual country fans when he played the Armadillo World Headquarters hippie haven in 1972 and brought down the packed house. "I wasn't surprised by the turnout that night," he notes. "I knew all along that kids would respond to what we were doing."

With his 1975 album Red Headed Stranger -- a three-day wonder that cost $12,000 -- Willie finally hit big on the charts with "Blue Eyes Crying in the Rain." He quickly rose to superstar and finally iconic stature, releasing countless classic songs and albums, collaborating with everyone from his country heroes and peers to punk rockers and even acting in movies. As a testament to his pervasive influence and respect, such stars as Eric Clapton, Steven Tyler, Ray Charles, Sheryl Crow, ZZ Top, Merle Haggard, Shania Twain and others gathered in April 2003 to help Nelson celebrate his 70th birthday in what was the most watched concert special in cable TV history.

Not bad for a country boy with a guitar. "I was always dumb enough to think I could do anything," concludes Nelson, "and got lucky and done it sometimes."