Posted in MusicWorld on July 31, 2000 by Martin Huxley 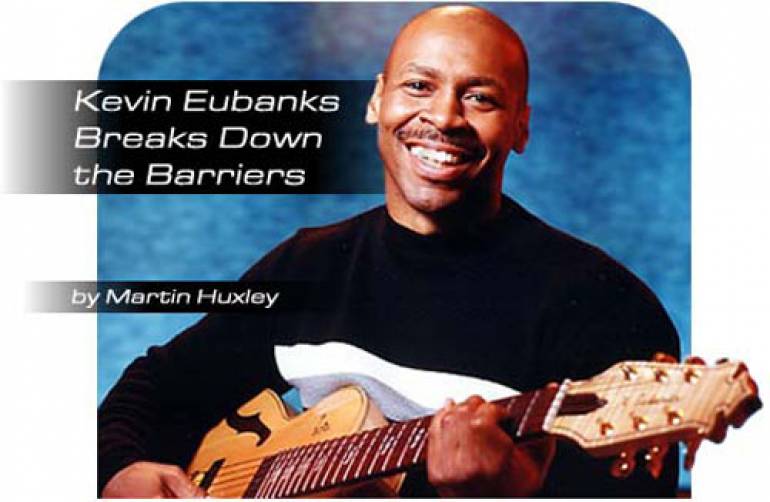 In recent years, guitarist/composer Kevin Eubanks has become a household name and face, thanks to his nightly television exposure as The Tonight Show's music director (and Jay Leno's frequent comic sidekick). But jazz fans are well aware that the easygoing Philadelphia native is also one of the jazz world's most respected and gifted musicians, with a nearly two-decade career that includes more than a dozen albums, several film scores and countless live performances.

Eubanks joined the Tonight Show band in May 1992, replacing Branford Marsalis as bandleader two-and-a-half years later. But he continues to perform his own music when his schedule allows, playing with his own small combos in front of receptive crowds, which have swelled beyond his original jazz following thanks to Eubanks' current media profile.

"It's amazing," Eubanks recently told The New York Times. "People of all ages know me from watching the Tonight Show and come to see me play now. That's cool because it exposes my music to another audience."

Still, Eubanks is adamant about not playing any of his Tonight Show themes at his own gigs. "You don't go to a basketball game looking for a touchdown," he explained to The New York Post. "I do the show five days a week, do whatever's necessary to contribute to the rhythm of the show. I still get to play jazz these days, just as always, but now it's on weekends or whenever we get some time off."

Eubanks - who counts Wes Montgomery, John McLaughlin and Jimi Hendrix amongst his principal guitar influences - hails from a musical family that includes his uncles, pianist Ray Bryant and bassist Tommy Bryant; his brothers, trombonist Robin Eubanks and trumpeter Duane Eubanks; and his cousins, bassist David Eubanks and pianist Charles Eubanks. Kevin began studying violin at the age of seven, but taught himself to play guitar after attending a James Brown show; he also plays piano and trumpet.

"Some people ask, 'How do you do [the Tonight Show] and then go out and play your concerts?' I never gave it a second thought. I don't have a set of rules for one and another set of rules for the other," Eubanks commented to The Boston Herald.

"It seems that the more you open your mind, the barriers just get broken down. And you can't really put your finger on why they were there in the first place."