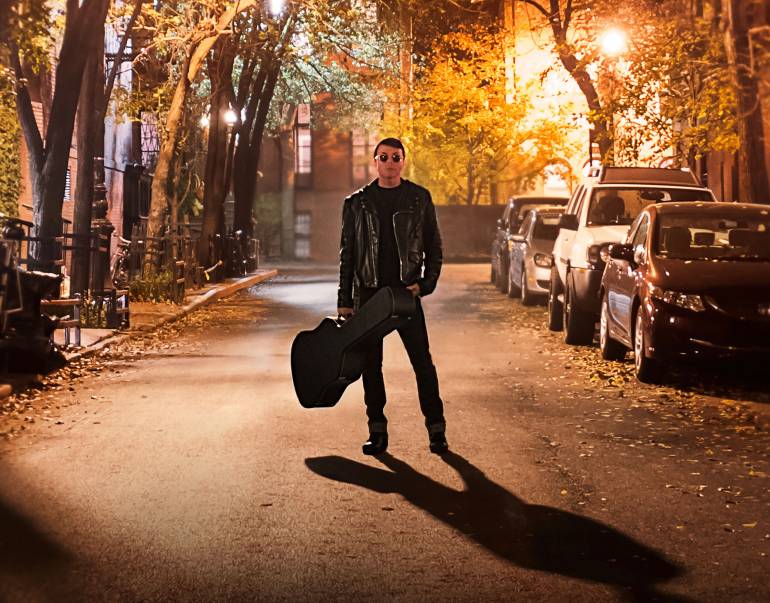 Though originally hailing from Tampa, Florida, where he had his own top-40 radio show at age seven, then later landing in Hoboken, New Jersey, where he made an impact fronting the groundbreaking power-pop band, the Bongos, BMI singer/songwriter Richard Barone finally decamped across the river to New York City’s Greenwich Village in the mid-80’s. While becoming a favorite on downtown Manhattan’s club circuit of the era, it was the Village’s storied legacy from decades earlier that significantly inspired and intrigued Barone. Prior to the punk and New Wave scenes of the 70’s and 80’s, Greenwich Village in the 60’s was a thriving hotbed for poets, writers, bohemians and innovative singer/songwriters.  During this pivotal decade, the Greenwich Village scene nurtured a crop of aspiring songwriters and musicians who alchemized elements of folk, blues, R&B and rock ‘n’ roll into innovative new forms that continue to inspire and inform further generations of songwriters today.

In 2016, Richard Barone paid homage to this era and its iconic trailblazers with  Sorrows & Promises: Greenwich Village in The 1960’s, a sweeping tribute album featuring songs by period-specific luminaries like Buddy Holly, John Sebastian, Janis Ian, Bob Dylan, Lou Reed, Phil Ochs, Paul Simon and many more.  But beyond being simply an album of popular covers, Barone did an immersive dive into the back history of the music, the songwriters and the movement, assembling robust presentations in tandem with the recording. Produced by Steve Addabbo, the GRAMMY-winning producer behind landmark albums by Suzanne Vega, Shawn Colvin, Bobby McFerrin and many others, Sorrows & Promises was both a lovingly executed and critically acclaimed collection of songs that only further solidified Barone’s devotion to evangelizing this transformative period in popular music. Buoyed by the reception, Barone breathed life into the project on the road, where it continued to evolve until it became obvious that the whole experience needed to come home to New York City itself.\ On August 12, Barone will host Music + Revolution: Greenwich Village in the 1960s, a free celebration of this music at SummerStage in the middle of the verdant sprawl of Central Park. Flanked by a formidable line-up of performers like John Sebastian of the Lovin’ Spoonful, Jesse Colin Young of the Youngbloods, Jose Feliciano, Marshall Crenshaw, Jefferey Gaines, Nellie McKay, Cindy Lee Berryhill, Joe McGinty and many more, Music + Revolution will realize Barone’s Sorrows & Promises project to full fruition. But it won’t end there. In addition to the SummerStage concert, Barone will be conducting a course on the subject at the prestigious New School of Jazz and Contemporary Music.

BMI recently caught up with Barone to find out how this amazing endeavor all came together.

This whole project has been a labor of love for a few years now, starting with the album, and now spreading further into other manifestations. How did the idea of the SummerStage concert come about?

The process started even before ‘Sorrows & Promises’ was complete. Mitchell Cohen (writer; former A&R executive at Columbia, Arista and Verve Records) came over to me after a performance at City Winery NYC and proposed the idea for the album. But it had already been on my mind for quite a long time to pay tribute to the musical history of the Village. Not only because I live here and love my neighborhood, but because it birthed one of the most important movements in American popular music and is not often given credit for it. While recording the album, we created six different panel discussion events at the New York Public Library’s Jefferson Market branch in the heart of the Village, to explore how the movement evolved. Then, of course, with each song on the album I researched the composer and history of the song, so I could deliver it with the truth and vibe that was intended. Then I went on the road around the country, especially focusing on venues that existed back in the 1960’s wherever possible. The songs took on lives of their own, and the stories that went with them became, for me, integral to the music itself. Last year at the SXSW Music Festival in Austin, Texas, I produced and hosted a five-and-a-half hour marathon that included artists from around the world interpreting this music. Artists of all ages and genres. Jesse Colin Young, Robin Hitchcock, Pegi Young, Peter Lewis from Moby Grape, and many others were onboard, from as far away as Iceland. That show with its expanded cast is what inspired me to bring it to SummerStage in Central Park in 2018.

You’ve amassed quite a lineup of talent for this, and I understand that the list is still growing? What’s the reception to the idea been like?\ So far, reaction has been phenomenal. There’s a lot of excitement around the idea of this concert being not just a nostalgia show, but one that is totally in-the-moment; combining many of the original 1960’s artists with more contemporary performers, like Nellie McKay, Marshall Crenshaw, Jeffrey Gaines, and others. The idea is that this music is as alive and relevant now as it was when it was first written. The amount of iconic talent and legendary artistry represented in this concert is staggering. Just to see John Sebastian, Melanie, Maria Muldaur, Jesse Colin Young, Jose Feliciano and the others together in the same show is amazing. The fact that it is a free concert for the City of New York, in the idyllic setting of Central Park, will make for one unforgettable evening that everyone is invited to. It suits the inclusionary attitude that drove this movement in the first place.

Having cut your own musical teeth and come of age during the thrust of Punk, New Wave and Power-Pop with the Bongos, were the singer/songwriters of this era of Greenwich Village who wrote both about social issues and the intricacies of the human condition always a touchstone for you? How did you first discover this music?

Even though I came of age during the Punk era, I knew I owed a debt to the first singer/songwriters, who laid the groundwork. It was a very DIY movement, very indie, very alternative for its time, when most popular songs were being churned out uptown in the Brill Building, or 1650 Broadway. There’s quite bit of “punk” attitude in that. Both movements were a lot about tearing down pre-conceived notions of stardom and its trappings. I was always aware of the ‘protest’ songs of Bob Dylan and the others, through my older brother who listened to the music, and by being interested in music history growing up. Tiny Tim (idiosyncratic pop artist of the late 1960’s), who I met and produced when I was 16, well after his original success, was a part of the Village scene then and taught me a lot about the music and the writers. He revered them. Then, in more recent years, I was fortunate to work with the great Pete Seeger who also explained a lot to me, especially about the folk revival that inspired that first wave of singer/songwriters, and about the power of a song. The beats and tempos may change and become “Punk” or “New Wave” or “Power-Pop” or any other genre. It’s the message that matters most. The Bongos always had a kind of folk/rock underpinning, and a healthy awareness and respect of what had come before.

Beyond the album and the forthcoming concert, I understand you’ll also be conducting a 15-week course on this subject at the New School. Tell me a little about that.

Yes, I am delighted that The New School of Jazz and Contemporary Music invited me to create the course ‘Music + Revolution: Greenwich Village in the 1960’s’ to begin at the end of August, right here at their Village campus. The course, like the album and concert, begins with Buddy Holly living and recording in the Village in 1959, soaking in the influences of the Folk Revival, the blues and jazz in the Village clubs like the Vanguard and the Village Gate, and the general feeling in the air at the end of the conservative 1950’s. Young people yearned for freedom from the restrictions of an outdated society. Chronologically, the course will explore how the artists, the venues, the neighborhood, the political and social climates, and other factors combined to create a perfect storm of creativity and an outpouring of music that was heard the world over. Naturally, I am suggesting that students attend the Central Park concert so they can witness some of the original music creators  in action.

In the half-century since this particular celebrated era, New York City – and Greenwich Village particularly – has changed dramatically. When you walk those same streets, do you feel that stirring sense of place that’s interwoven with this music and this culture? Do you feel that spirit is still alive?

Since moving to the Village in the mid-1980s, I have always felt a tremendous sense of history here. And I think that those early-1960s songwriters also felt the history of the Village, even then. The old-world immigrant culture and the old-style buildings and architecture stood in stark contrast to the space-age modernity of the 1960s. I have always felt that some of the formal language of many songs of that era owed a lot to the Village buildings and cobblestone streets. They still stand as reminders of the past. Bob Dylan was said to visit the New York Public Library to read 100-year-old editions of The New York Times, to pick up on some of the phraseology. Even the opening lines of his milestone “The Times They Are A-Changin’” sounds like it could have come from the 1800’s: “Come gather ‘round people, wherever you roam…”. To me, that feeling of constant change and youthful rebellion against a backdrop of history still remains today. Artists and creative types are still drawn to this neighborhood, perhaps because of that contrast of old and new. Ironically, its popularity has contributed to somewhat squeezing out what made it popular in the first place. As rents rise, it becomes harder for artists and music venues to continue to thrive in the Village, and that is a downside.

What is it, do you think, about this particular place and era that continues to resonate?

The music of Greenwich Village in the 1960’s was young music. Most of the writers on the scene were in their early 20’s, with some (like Janis Ian) only 14 when they were writing monumental songs. The Village is always renewing itself. It’s still a meeting place for the young and, of course, it is home to several universities including NYU and The New School. That vibe of young people eager to learn, eager to say what is on their minds, and eager to express their identities that manifested itself in that era’s music is as timeless as the Village itself. In the 1960’s, the assassinations of adored leaders, the unpopular war in Vietnam and even less popular military draft of 18-year-olds, and the urgency of the Civil Rights Movement found their ways into popular songs. Artists like Phil Ochs wrote specifically and poetically about these subjects, and others made political references. To me, just the idea of writing a song that expressed any personal opinion - whether obviously political or not - is a political statement. Self-expression is a First Amendment right, and the power of the songs created then was not only inspiring but breathtaking. Now, as then, young people have a lot to say about how they feel. Now, as then, the songs of this little neighborhood the 1960’s with their universal themes of equality, freedom and truth continue to give us a fantastic soundtrack for changin’ times.

Find out more about Music + Revolution: Greenwich Village in the 1960s here.