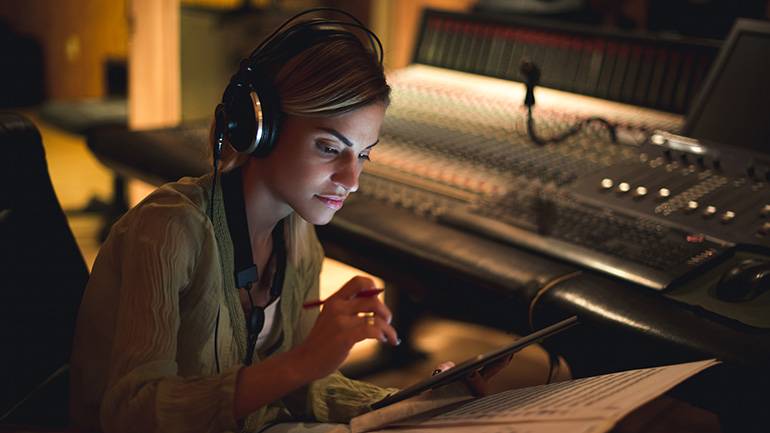 For genres like pop, hip-hop, R&B, and EDM/dance music, in most instances, the backing track is created before the words and vocal melody. The track consists of essentially all the music that will accompany the vocal and typically includes drums and percussion, keyboards, and bass. Live guitars or computer generated guitar sounds and additional instruments might also be included. The only things missing are the topline—the vocal melody and the lyrics.

The topline of a song can be defined as the melody and words a vocalist sings—the elements that go on “top” of the instrumental track. The topline is what you would hear if you were to mute all the instruments and background vocals except for the lead vocal track.

In many instances, multiple writers contribute to the topline, with one or more of them contributing the lyrics and others crafting the vocal melody. In some cases, one writer might compose the verse melody while another writes the chorus melody. Similarly, a backing track might be created by more than one writer. For example, one writer might create the beats, while others compose the chord changes and instrumental sounds with the piano and guitar.

Tracks are most often produced with sounds emanating from a computer or keyboard, but they can also be created with live instruments. I clung to every word at the Hawaii Songwriting Festival when producer extraordinaire Tony Visconti shared David Bowie’s process of writing some of his iconic songs. The tracks, which were the result of Visconti editing and distilling hours of the band jamming, came first. The strongest parts were made into sections that would become verses and choruses. After listening to the track, when it was time to record the vocals, Bowie stepped up to the microphone and sang the words and melody one or two lines at a time, essentially creating the topline.

If your songwriting process begins with playing a chord pattern and groove on a keyboard or guitar, and you add your words and vocal melody afterward, you are essentially writing a topline to your own track. Country songs are not typically written to a preexisting backing track, but many Nashville hits have been written that way and it has become increasingly popular over the past few years.

There is no right or wrong way to write a topline. Some writers compose a melody before exploring a title or lyric, while others prefer to choose a title before crafting the vocal melody or working on the lyric. In some instances, melody and lyrics emerge simultaneously. Here are some tips that have helped me write successful songs that began with a backing track.

When I was a child, my father often played instrumental classical music and encouraged me to visualize the stories. The melodies, tempo, and chord changes all helped me to imagine the scenes. For example, a waltz composed by Johann Strauss typically elicited images of an elegantly clad prince and princess dancing at a grand gala, while the dramatic strains of an orchestral piece composed by Richard Wagner usually led me to envision knights storming a castle or troops in battle.

Listen to the backing track and identify the emotions it evokes. Is it happy? Whimsical? Melancholy? Hopeful? Romantic? Sad? Does it make you feel like dancing?

Michelangelo said, “The sculpture is already complete within the marble block, before I start my work. It is already there, I just have to chisel away the superfluous material.” To paraphrase Michelangelo, the words and music for our songs are already embedded within the backing tracks. It is our job to release them.

After you have determined the mood elicited by the track, think about words and phrases that encapsulate that emotion. If you stockpile potential song titles and phrases (and you should), browse through them while listening to the track. Hopefully, one of them will seem like a perfect fit. If not, leave your internal censor outside the room and keep listening to the track until the title reveals itself. Sometimes, I find my titles by listening to a track while driving or walking.

When interviewed for my book 6 Steps to Songwriting Success (Billboard Books) Keith Urban shared, “Don’t underestimate stream of consciousness. Get on a microphone and make some vowel movements; you’ll be amazed at how much of the final lyric is in that gibberish.” This technique can help you find your title, as well as additional lines of lyrics.

There might be more than one place in the musical track that lends itself to accommodate your title. For example, in a song structure that includes verses and choruses (V-C-V-C, V-C-V-C-V-C, or V-C-V-C-B-C) your title might appear in the first line of the chorus, the last line of the chorus, or multiple places within the chorus. Ideally, the music in the backing track will make it clear where the title should sit within the track.

Melody is crucial to your song’s success, so don’t settle for the first melody that pops into your head. If you choose a title before writing the vocal melody that will accompany it, try singing your title various ways.

Explore placing the emphases on different syllables. For example:

Try incorporating repetition into the melodic phrase by repeating part of the lyric. For example:

Try assigning longer notes to some of the words. You might also explore adding nonsense syllables—sounds with no meaning—to your title. For example:

For each of these variations, explore a variety of different notes. You might try writing phrases that include notes that repeat, unexpected melodic intervals, ascending notes, descending notes, or notes that initially ascend then descend.

I wrote the topline for a song titled “Come Back” to an existing track that was sent to me by Chris Sernel. When Chris heard the rough vocal that I recorded on top of the track, he suggested I dig deeper and continue to work on the chorus to add range to the vocal melody and make it hookier. I wrote more than ten versions of the chorus melody before locking one in. The result can be heard on Crossing Rain’s debut single. The rap was added later by Crossing Rain’s Wyatt “Monarch” Kaneshiro. If I had settled for the first melody I submitted, I suspect the song would still be on a shelf instead of being on the airwaves.

For additional tips on crafting memorable melodies check out my article “5 Tips for Strengthening Your Song’s Melodic Hooks.”

Writing a lyric to a track is not unlike writing a lyric to an existing melody, or a lyric with no melody. The primary consideration when writing a lyric for an existing musical track is prosody—a marriage between the music and the words. The lyrics need to be consistent with the emotions evoked by the accompanying music. For example, a slow, mournful track that relies heavily on minor chords will likely work best with a sad, melancholy lyric.

Multiple paths can lead to a successful song, but in my experiences, when it came time to write the lyrics, in most instances the title was selected before the rest of the lyric was written. This allows the verse and bridge (if applicable) lyrics to be written in a way that supports and leads to the title, with the title summing up the meaning of the song.

Whether your lyric is written before or after your title, be sure to include lines that are fresh ways to express your concepts—lines that will make publishers, recording artists, and other songwriters say, “Wow! I’ve never heard it said that way before.” If anyone else could have written that same line, throw it out.

If the title is not established before the rest of the lyric, review the lyric to be sure the title feels satisfying when the listener hears it. For additional help with lyrics read my article “The Top 5 Lyric Pitfalls—and How to Avoid Them.”

To write toplines to an existing track, identify the primary emotion the track conveys and come up with a title and a fresh angle that reflect this feeling. Compose fresh, memorable vocal melodies and lyrics that complement the track. Then, rewrite your melodies and lyrics until they are as strong as you can make them, and soon you will be creating songs that are composed in the manner that countless hits have been born.

Jason Blume is the author of 6 Steps to Songwriting Success, This Business of Songwriting, and Inside Songwriting (Billboard Books). His songs are on Grammy-nominated albums and have sold more than 50,000,000 copies. He has been a guest lecturer at the Liverpool Institute for Performing Arts (co-founded by Sir Paul McCartney) and at the Berklee School of Music, and has been interviewed as a songwriting expert for CNN, NPR, the BBC, Rolling Stone, and the New York Times. For information about his workshops, webinars, additional articles, email list, and more, visit www.jasonblume.com.