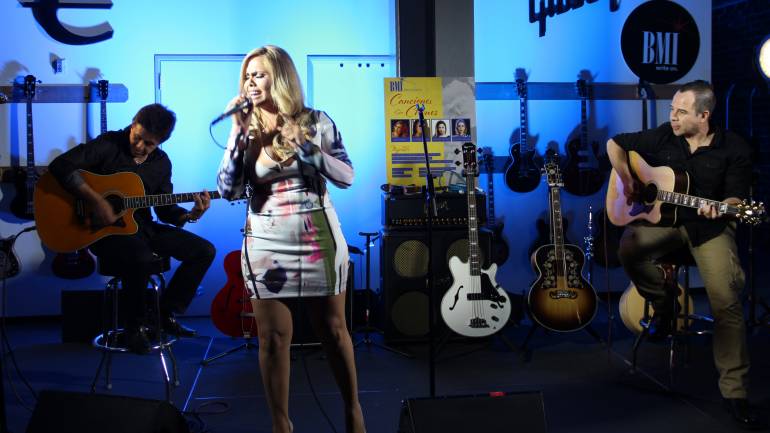 BMI’s showcase, ‘Canciones Sin Chones,’ benefiting the Mujer de Fé Foundation, recently brought together the Latin music community in support of a great cause. Featuring Latin GRAMMY-winning singer-songwriter Paulina Aguirre, Francisca Valenzuela, Victoria “La Mala,” and Erika Vidrio, the event took place on August 4 at the Gibson Showroom in Beverly Hills, CA. The intimate setting provided the perfect backdrop for a night of heartfelt reflection and acoustic performances by some of the most dynamic female voices in Latin music.

The underlying theme of the evening was in keeping with Mujer de Fé’s mission, to empower women dealing with issues such as anxiety, depression and abuse, which Mujer de Fé founder Paulina Aguirre spoke about during her performance. The organization works to help women by assisting in their intellectual and spiritual development and providing them with the necessary tools for personal and professional progress. This particular event for Mujer de Fé also targeted a very specific need. Moved by reports in the wake of two consecutive earthquakes in Ecuador that there was a desperate need for basic toiletries and women’s underwear in that ravaged country, the organization asked attendees in advance of Thursday’s showcase to bring donations in the form of pairs of “chones” (underwear) to help provide some relief to Ecuador’s victims.

Learn more about Mujer De Fé and how to contribute to their mission.