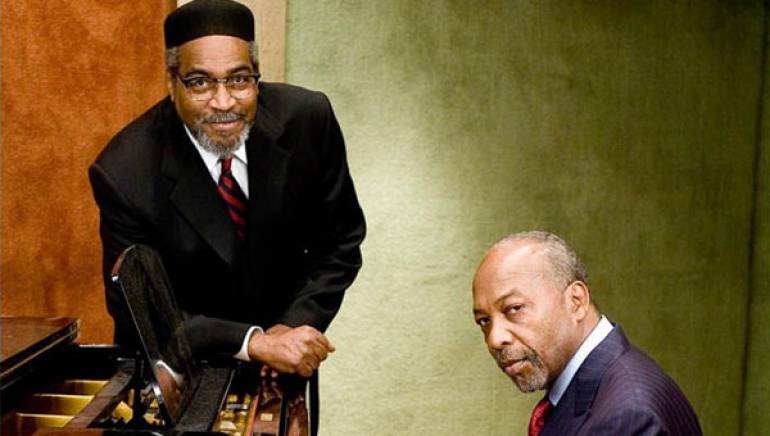 Individually, they would have been giants, but together, Kenneth Gamble and Leon Huff became more than giants: They became legends. As architects of the Philadelphia soul dynasty of the 60s and 70s, Gamble and Huff composed and produced landmark work by their Philly International Records artists as well as others including the O’Jays, Lou Rawls, Jerry Butler, Harold Melvin and the Blue Notes, Dusty Springfield, Wilson Pickett and so many more. The pair has accumulated 22 gold and 8 platinum albums on the strength of co-written classics including The O’Jays’ “For the Love of Money,” “Love Train” and “Use ta Be My Girl,” The Three Degrees’ “When Will I See You Again,” Billy Paul’s “Me and Mrs. Jones,” Lou Rawls’ “You’ll Never Find Another Love Like Mine,” Jerry Butler’s “Only the Strong Survive,” the incomparable Soul Train theme “The Sound of Philadelphia” and “If You Don’t Know Me By Now,” first recorded by Harold Melvin and the Blue Notes and later covered by Simply Red, whose version garnered Gamble & Huff their first Grammy. Together, the duo boasts an astounding 86 BMI Pop and R&B Awards. “Love Train” has earned 3 million performances, while “When Will I See You Again” and “You’ll Never Find Another Love Like Mine” have both generated more than 4 million performances, and “If You Don’t Know Me By Now” has amassed more than 7 million performances. Gamble & Huff are also members of the Rock & Roll Hall of Fame and Songwriters Hall of Fame, and recipients of the Recording Academy’s prestigious Trustees Award.

Colbie Caillat’s “Bubbly” garnered Song of the Year honors for its creative hive. Co-written by Caillat and singer/songwriter Jason Reeves and published by Cocomarie Music, “Bubbly” spent fourteen weeks atop Billboard’s Adult Top 40 chart. Featured on Caillat’s 2007 debut album Coco, the song has since been certified platinum. “Bubbly” has enjoyed ubiquitous success all over the world: In addition to reaching #1 in Australia and Czechoslovakia, the tune climbed into the upper echelon of charts in countries including Germany, Peru, Sweden, Belgium, France, Canada, and The Netherlands.

Caillat also delighted the audience with a charming performance of “Bubbly.”

In a BMI Pop Awards first, eight songwriters lay claim to the Songwriter of the Year crown. Each of the winners contributed two songs to the 50 most-performed list. In addition to “Bubbly,” Colbie Caillat’s “Realize” earned a spot in the top 50; Polow Da Don contributed “Forever,” co-written and recorded by Chris Brown, and “Love in This Club,” recorded by Usher and featuring Young Jeezy, to the list, while T-Pain’s “Kiss Kiss,” also recorded and co-written by Chris Brown, and “Low,” recorded by Flo Rida; Alan Chang’s “Everything” and “Lost,” both recorded by Michael Bublé; Matchbox Twenty’s Brian Yale and Paul Doucette’s co-compositions “How Far We’ve Come” and “These Hard Times” from the band’s retrospective Exile on Mainstream album; and Maroon 5 front man Adam Levine’s “Wake Up Call” and “Won’t Go Home Without You,” which he recorded with the band, all ranked amongst the year’s top 50 most-performed songs as well.

Universal Music Publishing Group secured its BMI Pop Publisher of the Year crown with an impressive 20 award songs and the highest percentage of copyright ownership among the year’s top 50. Universal’s catalog includes award-winners “All Summer Long” (Kid Rock), “Hate That I Love You” (Rihanna featuring Ne-Yo), “It’s Not My Time” (3 Doors Down), “Stronger” (Kanye West), “Sweetest Girl (Dollar Bill)” (Wyclef Jean featuring Akon, Lil Wayne, and Niia), “Shadow Of The Day” (Linkin Park), and “All Around Me” (Flyleaf).

In addition to earning a BMI Pop Award for her crossover hit “Teardrops on My Guitar,” Taylor Swift received the BMI President’s Award, which honors an exceptional individual in the entertainment industry deserving of special recognition. The BMI President’s Award is presented only on unique occasions when an individual has distinctly and profoundly influenced the industry.

The BMI Foundation’s 12th Annual John Lennon Scholarship was presented to pop singer/songwriter Jaci Wisot for her song “Firefly.” Currently a student at Belmont University in Nashville, Wisot recorded her first EP, Firefly, in May 2008. Established in 1997 by Yoko Ono in conjunction with the BMI Foundation and matched by generous donations from Gibson Musical Instruments, the prestigious John Lennon Scholarship program recognizes and fosters auspicious young songwriters between the ages of 15 and 24. For more information on the BMI Foundation, please visit www.bmifoundation.com.