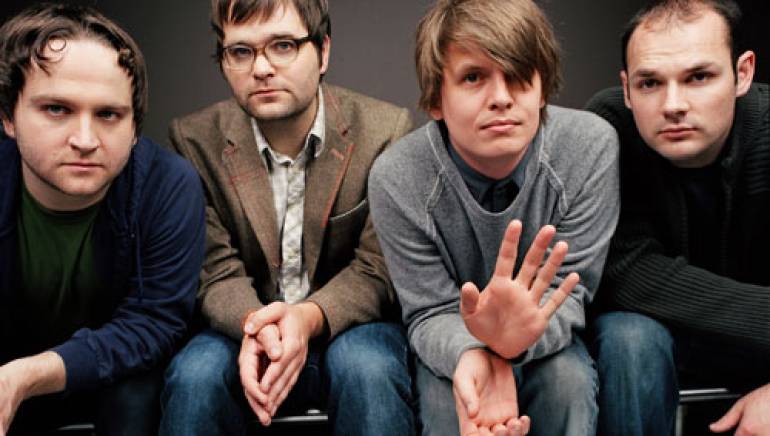 On album number five, Plans, rising modern rock band Death Cab for Cutie has definitely arrived. It’s their first release on a major, Atlantic Records, after selling nearly half-a-million copies of their 2003 album, Transatlanticism, on the Seattle-based independent Barsuk label. And it comes on the heels of their high-profile participation in 2004’s Vote For Change tour, where they shared the stage with superstars like R.E.M., Pearl Jam and Bruce Springsteen. They also received the ultimate au courant cultural imprimatur when character Seth Cohen on the red-hot TV series The OC proclaimed Death Cab For Cutie as his favorite band.

The band, which hails from Bellingham, WA, has roots that strike deep for their age, and transatlantic ones at that. Their name comes from the title of a song that 1960s absurdists the Bonzo Dog Doo Dah Band performed in the film Magical Mystery Tour. And an immediate link between main songwriter/guitarist Ben Gibbard and band producer/guitarist Chris Walla when they started working together in 1997 was their mutual affection for the cult Scottish pop-rock band Teenage Fanclub.

The band, which includes bassist Nick Harmer and, since 2003, drummer Jason McGarr, started out making records on a four-track recorder and with each album and tour have graduated to the next level, recording Plans at the famed Longview Farms studio in rural Massachusetts.

In contrast to much of the doom, gloom and anger that has dominated modern rock in recent years, DCFC is part of the wave of new romantic types that have recently arisen, like their peers Bright Eyes and Modest Mouse. “Probably 90 percent of all the songs that have ever been written are love songs,” observes Gibbard, who is adding to the catalog with his own flair, admittedly with a frequently heartbroken touch.

Bringing their own imaginative touches to the pop-rock style, Death Cab for Cutie is now poised to make their mark on musical history.