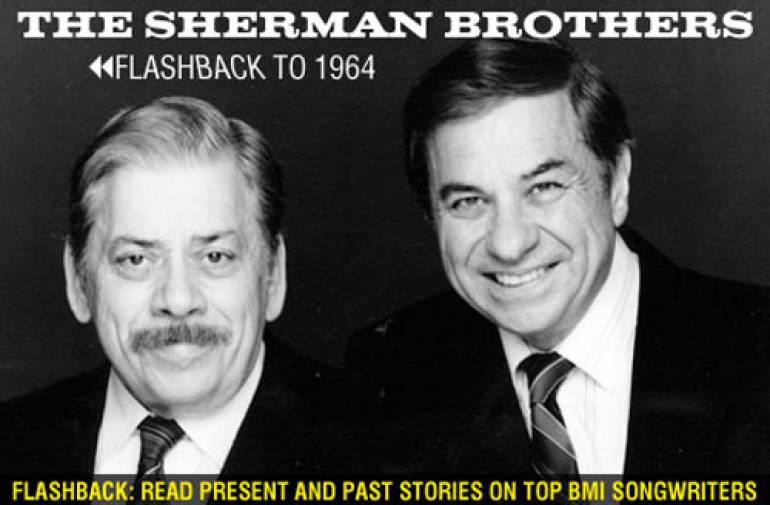 What a Supercalifragilisticexpialidocious Career:
Richard and Robert Sherman

How many songwriters can claim a career that has lasted more than 50 years? Who has successfully written hit singles, movie soundtracks, television themes and Broadway scores? Even added indelible expressions to the English language?

Richard and Robert Sherman, that’s who. Their first hit, “Things I Might Have Been,” struck gold in 1952, and that was just the beginning. BMI brought attention to the brothers’ achievements when a cover story on the Walt Disney classic Mary Poppins appeared in the October 1964 BMI magazine. Reviewers at the time called the film “one of the most magnificent pieces of entertainment ever to come out of Hollywood” and praised the score as filled with “bright, catchy songs.”

The Sherman brothers have never stood on their laurels, and, if anything, have reached an even higher peak of popularity today. They have two hit musicals playing around the world and their first original score for the stage is waiting in the wings.

The duo’s embrace of the musical theatre begin in 2001 when the producers of the 1968 film Chitty Chitty Bang Bang—the same group behind the James Bond series—suggested creating a stage version with new songs added to the original score. The show took off successfully in London in 2002, and was transferred to New York City in 2004, and has been playing to packed houses ever since.

Making a magic car fly is one thing, but making a nanny named Mary Poppins take to the air on stage was quite another. However, in 2004, the London premiere of the stage version took off. Reviewers called it “better in every way than the Disney film, delightful though that seemed 40 years ago” and suggested that “like Peter Pan, it will live for as long as there are children to celebrate it and be amazed by the wonder of human flight.” And it won’t be long before Mary spreads her wings and comes to America and Broadway.

The Sherman Brothers themselves are not afraid to take their talents to even greater heights, for they are preparing their first musical written originally for the stage. Although it possesses elements of fantasy, Merry-Go-Round is aimed at an adult audience. Producer Jack Stein describes it as a mixture of ”It’s a Wonderful Life and A Christmas Carol.” He states, “A father and his grown son get on a merry-go-round that takes them back in time to relive moments from the son’s childhood.”

Sounds like another hit that will take to the stage in Los Angeles for a workshop appearance this fall, as the Sherman Brothers continue their sixth decade of stellar musical achievements.