Posted in MusicWorld on August 2, 2005 by Bruce Britt 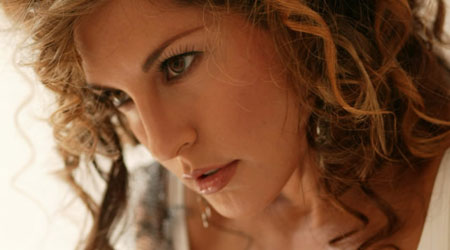 One of the brightest up-and-coming stars in the pop music firmament, Sylvia Tosun is an independent singer/songwriter who is earning heaps of praise for her ambitious music and historic performances.

That's right — historic. Tosun recently returned from Beijing, China where she performed at the first ever concert at the Great Wall, entitled "Wall of Hope." Known for her multi-lingual skills, Tosun sang in Mandarin, as well as English, while sharing the stage with Alicia Keys and Cyndi Lauper. The Chinese performance is scheduled to air on ABC sometime this year.

Upon returning from China, Tosun received good news. The singer learned that she was one of this year's recipients of the Songwriter's Hall of Fame Abe Olman Scholarship Award for Excellence in Songwriting. The scholarship, presented each year at the kick-off event for the SHOF induction ceremony, honors five gifted young composers and lyricists from songwriter programs sponsored by BMI and other organizations.

The scholarship not only bodes well for Tosun's career, it puts her in good company. Last year's recipient was r&b wunderkind John Legend, whose debut CD has resulted in impressive sales and unanimously positive reviews.

If Tosun's independently produced new debut CD, Jump In , is any indication, she will soon join Legend at the top of the pop charts. Produced by Miklos Malek (Celine Dion, Jennifer Lopez, Anastacia) and mixed by Grammy Award winner Tom Lord-Alge (Avril Lavigne, Peter Gabriel, Faith Hill), Jump In lives up to its inviting title. Combining refreshing pop-rock sensibilities with fearlessly romantic lyrics, the CD poises Tosun as a vulnerable singer unafraid of baring her soul in a time of cynicism.

Tosun's message appears to have struck a chord. The New York Times describes the singer as "exciting and timeless." Billboard magazine says Tosun's songs are a "journey across an exotic world music palette… all her own and simply fascinating."