Posted in MusicWorld on April 20, 2005 by Scott Schinder 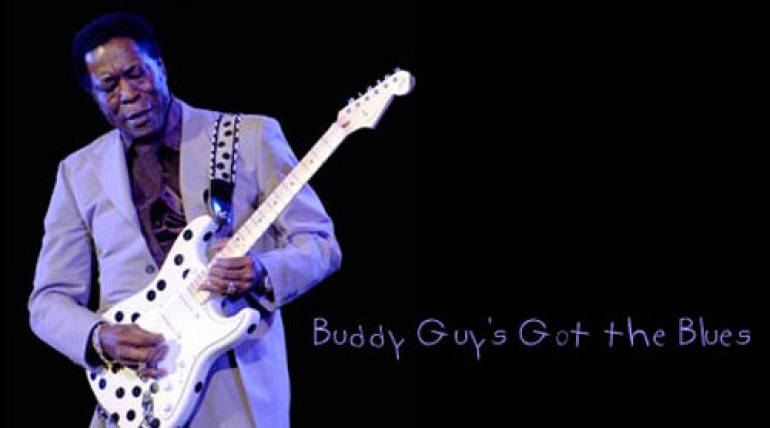 "I was ignored, but I didn't quit," Buddy Guy told the Washington Post last year, recalling the career lull that preceded his 1991 comeback album Damn Right, I've Got the Blues . "I kept playing even when I wasn't making a nickel, because I love what I'm doing."

One of the few living blues icons, and the strongest surviving link to the golden era of Chicago electric blues, the seminal guitarist — and 2005 Rock & Roll Hall of Fame inductee — continues to reap the dividends of a remarkable career renaissance. For the past decade and a half, the five-time Grammy winner has achieved late-blooming mainstream stardom, thanks to the same incendiary guitar work that made him a cult legend decades ago.

Born George Guy in rural Lettsworth, Louisiana on July 30, 1936, Buddy moved to Chicago in 1957, and eventually established himself as a force on the thriving local music scene. He built his reputation playing on sessions for the fabled Chess label, backing up such artists as Muddy Waters, Howlin' Wolf and Koko Taylor, while stepping out front on such now-classic singles as "First Time I Met the Blues" and "Broken Hearted Blues."

Guy's fiery, self-taught guitar work proved inspirational to such budding axemen as Jeff Beck, Eric Clapton and Keith Richards, all of whom have enthusiastically sung his praises in the years since. Guy also earned a reputation for his flamboyant onstage showmanship, which he continued to hone through a long-running collaboration with harmonica player Junior Wells.

But Guy's recording career eventually drifted into rocky waters. He hadn't had a domestic album release in nearly a decade when he signed with the Silvertone label and released Damn Right, I've Got the Blues . The album — which featured guest appearances from by Beck, Clapton and Mark Knopfler — introduced Guy to an enthusiastic new audience, and eventually earned a Grammy as Best Contemporary Blues Album.

The commercially savvy crossover sound of Damn Right, I've Got the Blues and its followups Feels Like Rain and Heavy Love gave way to a more primitive, rural approach on 2001's acclaimed Sweet Tea , which was followed by 2003's stripped-down Blues Singer , which emphasized Guy's vocals and acoustic picking.

While those projects exposed lesser-known aspects of Guy's talents, the landmark Damn Right, I've Got the Blues continues to hold a special place in the hearts of the artist and his fans. That's evident from Silvertone's March release of a newly expanded edition of the album, which augments the original disc with a pair of U.K. b-sides. Silvertone has also released an exclusive "digital box set" — dubbed Best of the Silvertone Years 1991-2005 and featuring a trio of previously unreleased tracks — through iTunes' online download service.

The release of the retooled Damn Right, I've Got the Blues coincides with Guy's recent election to the Rock & Roll Hall of Fame, for which he was inducted by his contemporary B.B. King and his acolyte Eric Clapton. Despite that honor, Guy isn't coasting on his reputation. The 68-year-old artist maintains a busy touring schedule and still delivers decidedly high-energy live shows . He also continues to run his Chicago nightclub, Buddy Guy's Legends, and is currently working on a new album with producer/musician Steve Jordan.