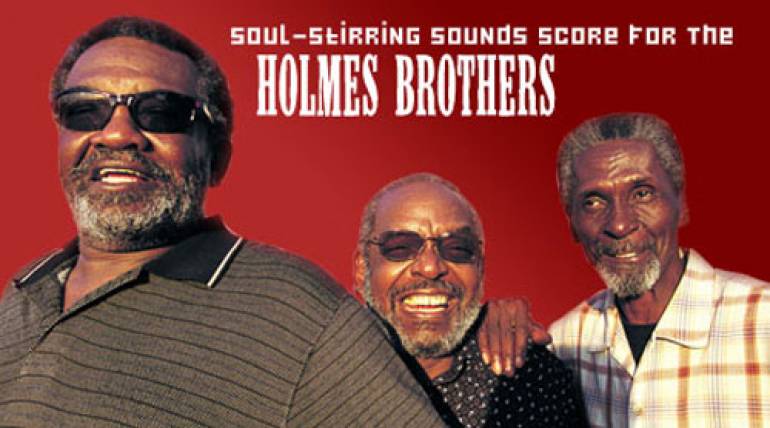 There are few better testaments to the value of faith, perseverance and sticking to your musical guns than The Holmes Brothers, whose rhythm & blues music reminds contemporary listeners of the universality and musical breadth of the venerable style. The core members of the group - brothers Wendell (guitar and vocals) and Sherman Holmes (bass and vocals), and Poppy Dixon (drums and vocals) - have been a musical unit since 1968. And their experience stretches back even further to Wendell and Sherman's youth in Christchurch, Virginia in the 1940s and '50s, teething on the gospel music they sang and played in church as well as the blues of Jimmy Reed, Junior Parker and B.B. King.

Just a listen to The Holmes Brothers' latest release on Alligator Records, the aptly title Simple Truths , attests to their command of r and the vision that has made them soul music heroes on the current scene. In addition to the classic strains of their original songwriting, the Brothers bring their own spirit to material by such esteemed songwriters old and new as Townes Van Zandt, Bob Marley, Gillian Welch, Willie Nelson, Hank Williams, Collective Soul and Bruce Channel. With their heavenly harmonies, down in the groove rhythms and Wendell's sharp and smart guitar work, it's no wonder that The Chicago Tribune hails them as "the undisputed masters of blues-based American roots music."

It's that mastery that has led the band to record with Van Morrison, Peter Gabriel, Odetta, Phoebe Snow, The Jungle Brothers and Joan Osborne (who produced their previous album, Speaking In Tongues ) and even perform for President Clinton. To wit, they also garnered six W.C. Handy Award nominations this year for Simple Truths.

It's all sweet rewards for a professional journey that began in 1959 when Wendell Holmes left Virginia for New York City, where The Holmes Brothers continue to be based, to work with singer Jimmy James after studying composition and music theory at Virginia State University. Brother Sherman followed soon after, and the two backed such names as The Impressions, John Lee Hooker and Jerry Butler before joining forces with fellow Virginian Dixon, and after more work with a variety of bands and artists, finally struck out on their own as The Holmes Brothers in 1979.

The act began winning fans in small downtown Manhattan clubs (where they befriended fellow rising artist Osborne) in the 1980s before cutting their first album for Rounder in 1989. In '92, they released Jublilation on Gabriel's Real World label, and amidst their busy performing schedule throughout the decade, found time to appear in and record music for the independent film "Lotto Land" and back Osborne on a tour opening for Bob Dylan.

With a gift for turning even the most secular venues into sacred places with their soul-stirring music, The Holmes Brothers are now being blessed with success and acclaim for their music. "The Bible says the word must go even into the dens of iniquity," says Wendell. "We play blues, gospel, country - a mix of a lot of different things. We don't have a problem with that, and we don't believe Jesus does. We never forget that Jesus turned water into wine, not the other way round!"