Posted in MusicWorld on March 3, 2005 by Kevin Zimmerman 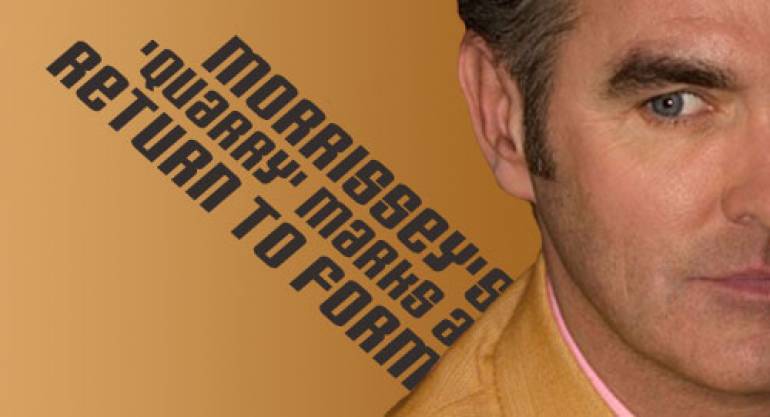 It's been a pretty incredible year for Morrissey. The former lead singer for '80s icons The Smiths returned in 2004 with You Are the Quarry (Attack), one of his best-received solo efforts, spawning four Top 10 singles in his native U.K. - the only artist to achieve that feat last year - and reconnecting with his legions of rabid fans.

The man's famously dour demeanor – cemented by such Smiths titles as "Unloveable" and "Heaven Knows I'm Miserable Now," not to mention such solo tracks as "I Don't Mind If You Forget Me" and "Sorrow Will Come in the End" - was belied by his sweet lead vocals and sometimes Wildean wit. Nevertheless, when asked last year by the Sydney Morning Herald if making music makes him happy, he replied, "Well, yes, because if you're not making music then what are you? I mean what am I, anyway? I don't know what I am. I've been trying for 30 years." He concluded with a chuckle, "I feel undefinable, actually."

Born Steven Patrick Morrissey in Manchester 45 years ago, the singer's hooking up with guitarist/songwriter Johnny Marr was a life-altering act, resulting in three solid albums and one - 1986's The Queen is Dead - a near-masterpiece of '80s alternative rock. A year later, Marr left, and the group was over.

A stream of solo albums followed, with highlights including his 1988 solo debut Viva Hate and 1992's Your Arsenal - the latter muscularly produced by guitar legend Mick Ronson - and You Are the Quarry takes its rightful place among those efforts. Swinging from catchy pop gems like "First of the Gang to Die" and the purposeful statement song "America Is Not the World" (the always-controversial singer broke the news of Ronald Reagan's death to a Dublin audience by saying he'd have preferred the White House's current occupant to have died) to the sweet, complex "I Have Forgiven Jesus" and "Let Me Kiss You" (a highlight of Nancy Sinatra's recent, otherwise forgettable self-titled album), Quarry represents a smashing return to form.

Just how long the mercurial artist's return to the spotlight will last is anyone's guess, however, as Morrissey has hinted in the press that another seven-year absence wouldn't be out of the question. For now, fans can tide themselves over with a re-released version of Quarry , featuring a DVD of the album's videos and a handful of TV appearances.

"Despite massive discouragement, I remain myself," he told the Morning Herald. "Somebody has to be me so it might as well be me."