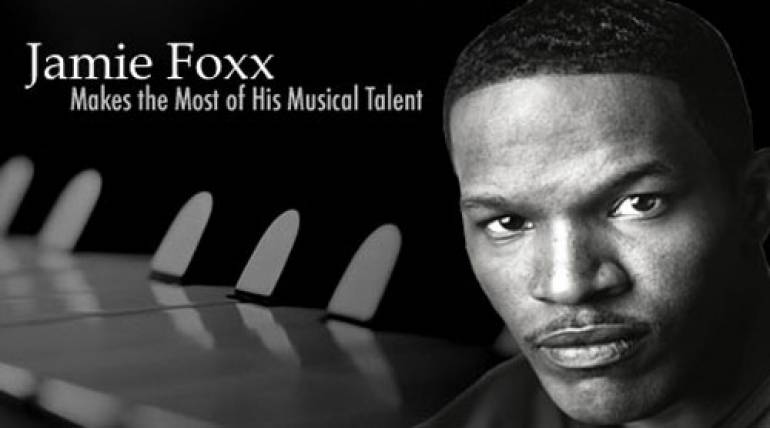 It's obvious from his Oscar-winning portrayal of Ray Charles in the movie Ray that actor and comedian Jamie Foxx is very musical. What may be less known, at least just yet, is that he has also pursued a career as a musician and recording artist. But that is likely to change when Foxx releases an album this year on J Records.

"I started out in music," explains Foxx, who began taking piano lessons at the age of three in his hometown of Terrell, Texas. In addition to being a football star and the class clown during his high school years, Foxx was the music and choir director at his church and led an r&b group. His talents won him a scholarship to study music at United States International University in San Diego.

During his college years, Foxx frequently visited Los Angeles in search of a record deal. But after some friends persuaded him to take the stage at a comedy club on an open mike night to perform some of his uncannily accurate celebrity impersonations, Foxx's entertainment career took off along a different vector. His comedy performances won him a slot in the cast of "In Living Color" that led to his own TV vehicle, "The Jamie Foxx Show," that ran for five seasons on the WB Network.

But Foxx's professional attention soon focused more on his acting career as he won roles in Any Given Sunday (for which he sang the theme song) and Ali . Thanks to a recent star turn in Collateral and an Oscar-nominated performance in Ray , Foxx is now a marquee-name dramatic actor.

His love of music continued to be a part of his career. In 2001, Foxx hosted the MTV Video Music Awards show, and last year he was heard on Twista's #1 hit "Slow Jamz." He also hosted and performed on the CBS-TV salute, "Genius: A Night for Ray Charles."

There's a delightful synchronicity in how playing Brother Ray has brought Foxx back around to pursuing his music. No doubt his meeting with Charles in preparation for the role, especially when the two took the stool at the keyboard together, gave Foxx a boost as a musical talent as well as an actor. "He wanted to see what I could do," Foxx recalls, "so he kept playing stuff and challenging me to do the same to see if I could keep up. And finally he said to me, 'You got it, kid.' It was total validation.

"I came out here to Los Angeles 15 years ago to start a music career," he notes. "Hell, if I had stayed with music, I probably would have one hit - if that - and been broke and pissed off somewhere. It's funny how your plan changes.” And thanks to the surprising pathways life sometimes offers, Jamie Foxx the singer, musician and songwriter will likely also get his musical just due now as well.