Posted in MusicWorld on December 15, 2004 by Robert K. Oermann 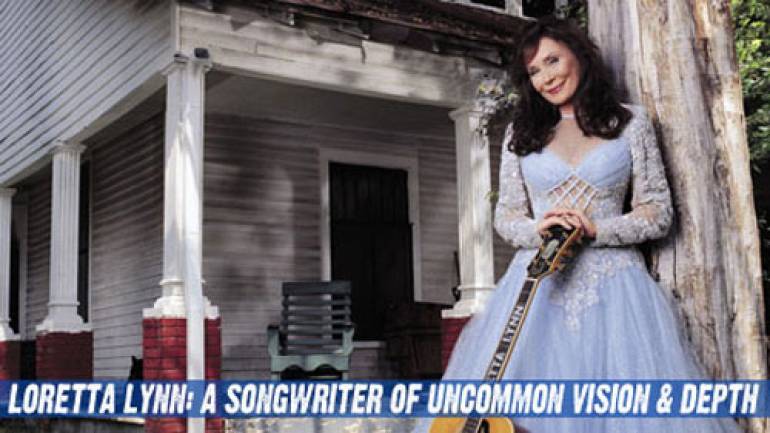 When Her late producer and record-label chief Owen Bradley called Loretta Lynn “the female Hank Williams,” he was referring to her striking originality as a writer-artist.

True, her clarion-call voice is one of country music’s most distinctive. But what truly sets Loretta Lynn apart is her songwriting ability. As her self-penned Van Lear Rose collection demonstrated in 2004, she is a composer of uncommon vision and depth.

A BMI affiliate for 45 years, Lynn launched her career in 1960 with her self-composed “I’m a Honky Tonk Girl.” The song brought her to Nashville and was her springboard to stardom. When Bradley signed her to Decca Records, he realized at once that she had a highly personal and singular style as a writer. He encouraged this individuality.

“I was the first one to write it like the women lived it,” she said of her forceful songs. “Probably I was different in writing about things that nobody would even talk about in public. I didn't realize that they didn't. I thought, ‘Well, gee, this is what's going on; I'll write about it.’ I was writing about life. And, of course, I had a lot of songs banned.” Singles like 1969’s “Wings Upon Your Horns,” 1972’s “Rated X” and 1975’s “The Pill” were all considered controversial.

Although best known for her chin-out, self-assertive numbers, Lynn’s songs cover a much wider range. She wrote for all 29 albums she created between 1962 and 1974, crafting gospel pieces, Christmas tunes, duets with Ernest Tubb and songs in a variety of other styles. Consider the diversity of such hit Lynn compositions as 1969’s “To Make a Man,” 1966’s “Dear Uncle Sam” and 1970’s “I Know How.”

She also wrote for others, notably Tubb’s “I’m Gonna Make Like a Snake” (1968), Charlie Louvin’s “Sittin’ Bull” (1970), sister Crystal Gayle’s disc debut “I’ve Cried the Blue Right Out of My Eyes” (1970) and tunes for The Wilburn Brothers, Warner Mack, sister Peggy Sue and brother Jay Lee Webb. In all, there are more than 150 songs in Lynn’s BMI catalog.

To spotlight its star’s talent, Decca titled a 1970 LP Loretta Lynn Writes ‘Em and Sings ‘Em . She drove the point home with her very next single, her autobiography in song, “Coal Miner’s Daughter.”

Her best-selling book and Oscar-winning film of the same title chronicled her rise from Appalachian poverty, marriage at age 13, career exhaustion and ultimate triumph. They also made Loretta Lynn an international idol in the 1970s.

She continued to appear on the country charts throughout the 1980s. She provided “Wouldn’t It Be Great” to her 1993 Honky Tonk Angels trio album with Dolly Parton and Tammy Wynette. She also wrote songs for her 2000 comeback CD Still Country , including “I Can’t Hear the Music,” her moving elegy to husband “Mooney” Lynn, who died in 1996. The acclaimed 2004 Van Lear Rose CD found her at a new peak of her powers as a tunesmtih.