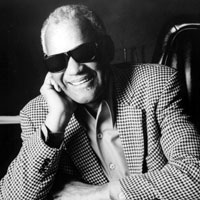 BMI songwriter and legendary soul artist Ray Charles died June 10 from complications due to liver disease. He was 73.

An American cultural icon whose music transcended all styles and genres, Charles was the first artist to combine gospel music with pop and r&b, resulting in a sound all his own. "Brother Ray," as he was called by many, was also known as "The Genius" for songs such as "What'd I Say," "Hit the Road, Jack," "Georgia on My Mind," and his very first hit "I've Got a Woman."

The twelve-time Grammy Award winning artist and Rock and Roll Hall of Fame inductee recently finished recording Genius Love Company, an album of duets featuring Norah Jones, B.B. King, Willie Nelson and others that is due out at the end of August. He enjoyed a career that spanned more than 50 years and he never stopped touring. He was even set to tour this summer before his illness took over.

Born Ray Charles Robinson in 1930 in Albany, Georgia, he was raised in Greenville, Florida, where he began playing piano before the age of five. After losing his sight from glaucoma at the age of seven, Charles was sent to a school for the blind, where his gift and lifelong passion for music emerged.