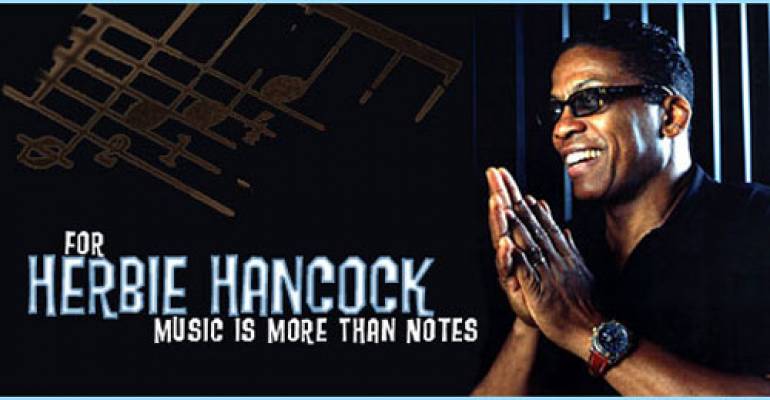 Herbie Hancock is not just one of the giants of contemporary jazz. As a keyboard player and composer, Hancock is a paragon of innovation and vision within contemporary music whose work has enthralled listeners across the musical spectrum.

A native of Chicago who was a classical piano prodigy in his youth and embraced jazz in his teens, Hancock arrived in New York City's thriving jazz scene in 1960 to play with trumpeter Donald Byrd after graduating from Grinnell College. His 1962 debut album, Takin' Off , yielded his first standard, "Watermelon Man," later a hit for Mongo Santamaria. He soon joined Miles Davis's band and was instrumental in the trumpeter's shift from acoustic be-bop to electric fusion and funk. At the same time, he composed yet another classic song with the title tune to his 1965 album, Maiden Voyage .

Hancock also began composing a string of acclaimed film soundtracks, starting with the score to Blow Up in 1966 and winning an Academy Award in 1987 for his soundtrack to ’Round Midnight . By the end of the 1960s, he had left Davis's group to form his band Headhunters, which took jazz innovations to the rock and pop audience and was a leading force within the fusion movement.

From that time on, Hancock has continued to push the envelope of modern music while also continuing to pay musical homage to the jazz tradition. He was one of the first keyboard players to make both the Fender Rhodes electric piano and the synthesizer mainstream musical instruments, and on his 1983 album, Future Shock, Hancock explored the burgeoning electronic and hip-hop styles. His single from that set, "Rock It," earned him a Grammy for Best R&B Instrumental and was an r&b and dance hit, while the video for the song won five MTV Video Music awards. In 1977, he reunited the classic Davis quintet of the early 1960s as V.S.O.P. for an album and tour (with Freddie Hubbard on trumpet in Davis's stead). His 1998 album, Gershwin's World, found Hancock collaborating with Joni Mitchell, Stevie Wonder, Kathleen Battle, the Orpheus Chamber Orchestra, Wayne Shorter and Chick Corea in a masterful tribute to George Gershwin. The set won Hancock three more Grammys (out of his total of eight Grammy Awards to date).

Hancock's career has also seen him produce the debut album by Wynton Marsalis, host the TV shows "Rock School" for PBS and "Coast to Coast" for Showtime, and recently tour with the Dave Matthews Band. He also formed the Rhythm of Life Foundation in 1996 to provide financial support to individuals or companies that are using technology for the advancement of humanity and recently started Transparent Music to promote groundbreaking musical endeavors.

Behind all of Hancock's musical achievements and endeavors is a sensibility that believes that music is something greater than mere notes and tones offered for entertainment. As Hancock observes, "Creativity and artistic endeavors have a mission that goes far beyond just making music for the sake of music."
SOURCEMusicWorld TAGS Classical Jazz Pop Rock Foundation Musicworld Feature Artists Blow Up Chick Corea Miles Davis Herbie Hancock Wayne Shorter