Posted in MusicWorld on December 8, 2003 by Rob Patterson 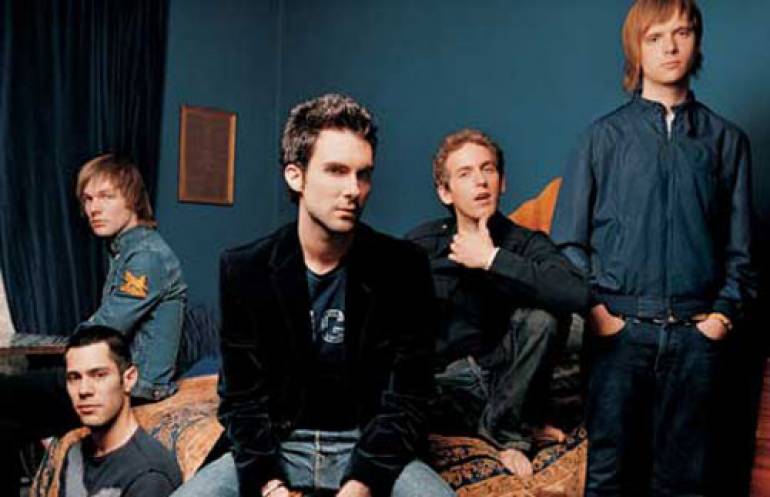 Many times, all it takes is that one song to bring attention to new talent with even more to offer. Such is the case with Maroon 5's "Harder To Breathe," which spent a good part of 2002 and 2003 on the radio. Suddenly, the Los Angeles punk/funk quintet is one of the hottest new quantities in modern rock.

High school pals Adam Levine (vocals and guitar), Jesse Carmichael (keyboards), Mickey Madden (bass) and Ryan Dusick (drums) previously released one major-label album as Kara's Flowers while still teens and were subsequently dropped. "We were like, 'Okay, what do we do now?'," recalls Levine. "So we ran away to college to figure it out." He and Carmichael landed at a school in New York where "we were staying in this housing place that was primarily black.

"The halls would be blasting Gospel music and people would be listening to stuff that we'd never actually listened to, like Biggie Smalls, Missy Elliot and Jay-Z. The Aaliyah record had come out around then, and we were just blown away. When I think of songwriting, I think of The Beatles, Dylan, Simon & Garfunkel -- the stuff that I grew up on -- but then I was like, 'I want to do this.' Stevie Wonder came into my life at that point," says Levine, "and I just found a knack for doing it."

On arriving back in L.A., they added guitarist James Valentine and became Maroon 5, "a soul band, but with five white dudes," according to Levine. "We just wanted to do something different. Just to do the thing that is expected, we were getting kind of bored with it. We were into doing something that was against the grain, taking something out of context."

"Harder To Breathe" came about when the band thought their debut, Songs About Jane , was done, but their label insisted on another crack at songwriting. "It was the 11th hour, and the label wanted more songs," Levine recalls. "It was the last crack. I was just pissed. I wanted to make a record and the label was applying a lot of pressure, but I'm glad they did."