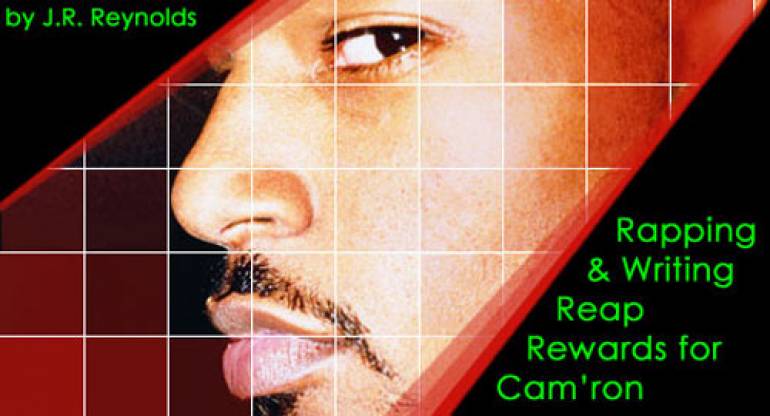 Phat beats and infectious melodies drive all the hottest songs, but at the heart of it all is songwriting. The best artists know this, which is why rapper Cam'ron has excelled at his craft in a major way.

With three albums to his credit and a fourth due later this year, the artist has combined rapping and writing to establish himself as a significant creative influence in the business. In recognition of his songwriting success, he was honored at BMI's 2002 Urban Awards.

But that was last year. This year, he's again in high gear with his own label. "We got the Diplomat label poppin' off, with my man Juelz Santana, the first artist on that," says Cam'ron.

By formulating relevant (and often autobiographical) lyrics to drive his infectious music, this versatile hip-hopper has earned the respect of his peers and acquired a following among record buyers. "One of the things that makes [me] different is that I can be hardcore one minute, slick and laid-back the next," explains the Harlem-born performer. "I'm trying to set trends, not follow them."

"Oh Boy Just Blaze," perhaps his most memorable song, was a Top 5 hit on last summer's Billboard Hot 100 and topped the magazine's R&B/Hip-Hop Singles & Tracks chart. Its infectious hook and scintillating lyrics are a testament to an artist whose charismatic charm ranks second only to his fervent desire to write quality material for the masses.

Confessions of Fire, Cam'ron's 1998 debut album, jump-started his musical career when it rose to No. 6 on the Billboard 200 and was certified Gold by the RIAA. Then, of course, the crew he rolled with didn't hurt either.

Cam'ron played basketball in high school where he excelled as a point guard. One of his teammates was rapper Mase. The two joined forces off the court as rap duo Killa Cam & Murder Mase, garnering a measure of underground hip-hop success. But it wasn't until Mase introduced Cam'ron to the late Notorious B.I.G. that things began heating up.

"He had all sorts of tracks around his apartment," Cam'ron recalls. "He flipped on about 12 or 13 beats, and I flowed to every one of them."

The encounter led to a second important introduction, to B.I.G.'s Untertainment label partner Lance Rivera, who signed Cam'ron. Like most developing acts, Cam'ron found himself collaborating on several soundtrack cuts. But in addition to writing songs for his then-soon-to-come solo debut, he also was penning tracks for other artists – not the least of whom was Lil' Kim, whose "Crush On You" that he authored was certified Platinum.

"Back then, I was just showing everybody that I'm multi-talented and that I can flip any style," he says.

Cam'ron's future appears bright. In addition to his upcoming album, Purple Haze, the rapper continues to promote his own label and the artists on it. "With me, what comes along comes along. I just want Juelz and The Diplomat's album to do well, and then lookout for my new album."