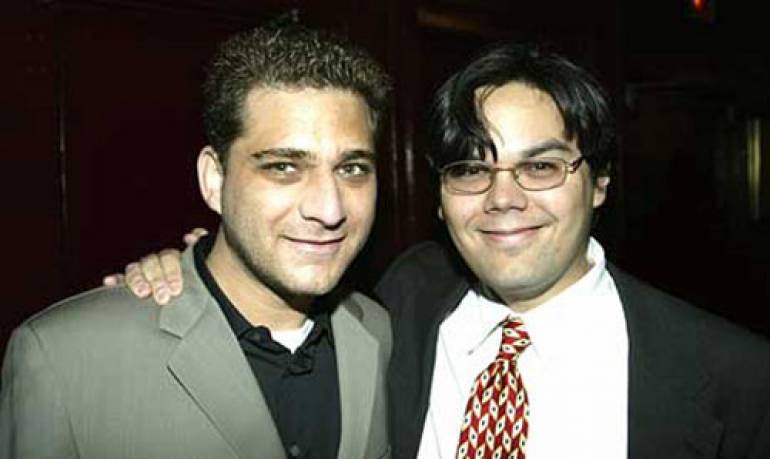 Avenue Q, the new musical by BMI composers Robert Lopez and Jeff Marx which opened off-Broadway March 19 to rave reviews, will move to Broadway's Golden Theatre on July 11. Lopez and Marx first met and collaborated in 1998 at the BMI-Lehman Engel Musical Theatre Workshop. The show features live actors interacting with puppets — although the production is decidedly for adults.

The show takes place in New York City on a street of Lopez and Marx' invention, Avenue Q, the only affordable neighborhood for the generation just out of college. Puppets and human neighbors tackle life's most agonizing problems, such as race, love, money, sex and sexual orientation.

The writing team, which collaborates on both music and lyrics, wrote a Muppet movie version of Hamlet, called Kermit, Prince of Denmark, which won them the coveted Kleban Award, established by BMI writer Edward Kleban, lyricist of A Chorus Line and composer-lyricist of A Class Act.

Marx says that the inspiration to write a show with puppets originated when the team tried to figure out why people their age weren't that interested in musical theatre. "We wanted to create something that people our age would love, and we remembered loving the Muppets . . . plus, you don't think twice when a puppet opens its mouth and starts singing."

Lopez spoke about the unique process of two composer/lyricists writing together: "We both sit in a room or in a restaurant and talk about what we want the song to be, we both add to it and criticize and sit at the piano and change places and play into a little crummy tape recorder and ad lib until we have something that resembles a first draft."

As the team does rewrites, Marx remarked that they go through "a two-filter process. Lyrics or chords or melodies that we don't both like, get cut."

The show had an initial reading at the York Theatre and songs that the team developed at the BMI workshop were presented at the York, a BMI showcase, attracting the attention of the show's Broadway producers Jeffrey Seller, Kevin McCollum and Robyn Goodman. The off-Broadway run, which has been extended twice, is a co-production of The Vineyard Theatre and The New Group.